Nearly 500 bookstores across the country will be participating in the national literary party that is Independent Bookstore Day tomorrow, April 29! Twenty-three stores will take part in Seattle Independent Bookstore Day (Facebook | Twitter). The Seattle Review of Books, Seattle Times, Stranger, and many others have excellent guides to tomorrow’s special events, limited edition goods, giveaways, and much more. (P.S. Don’t miss the 11 a.m. Book Larder signing with A Year Right Here author Jess Thomson!)

California through Native Eyes by William J. Bauer, Jr. has been awarded Honorable Mention for the 9th Annual Labriola Center American Indian Book Award. “The book made a profound and thought-provoking impact on the judging committee,” wrote chair Dr. David Martinez. Congratulations to the author and all involved!

Asians in Colorado by William Wei is a finalist for the 2017 Colorado Authors’ League Writing Award in General Nonfiction. The winners will be announced at an awards banquet on May 5, 2017 in Arvada, Colorado. Good luck to our author and all finalists!

We remember Eugene N. “Koz” Kozloff (1920 – 2017), who passed away on March 4th in Anacortes, WA. He was the author of books including Plants and Animals of the Pacific Northwest (1976), Seashore Life of the Northern Pacific Coast (1983), and Marine Invertebrates of the Pacific Northwest (1987). Read obituaries in the Anacortes American / Skagit Valley Herald and the San Juan Islander.

Book of the Month Giveaways 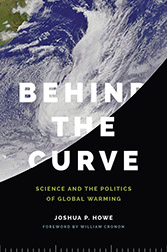 Enter to win one of this month’s picks! (Open to US residents only.)

Various coverage for A Year Right Here by Jess Thomson:

Various coverage for Seattle Walks and Too High and Too Steep by David B. Williams:

A trio of reviews for I

Process (blog of the Organization of American Historians) features a commentary piece by Making Climate Change History editor and Behind the Curve author Joshua P. Howe on the March for Science as a moment in the public face of American science.

The Hope of Another Spring: Takuichi Fujii, Artist and Wartime Witness
By Barbara Johns
Foreword by Rogers Daniel
Introduction to the Diary by Sandy Kita

This richly illustrated book reveals the life story and work of Issei artist Takuichi Fujii (1891-1964) and gives a telling alternative view of the wartime ordeal of West Coast Japanese Americans. The centerpiece of Fujii’s large and heretofore unknown collection is his illustrated diary, which historian Roger Daniels calls “the most remarkable document created by a Japanese American prisoner during the wartime incarceration.” The Hope of Another Spring is a significant contribution to Asian American studies, American and regional history, and art history.

Follow the history of Woodland Park Zoo from its nineteenth-century beginnings as a park originally carved from the wilderness north of downtown Seattle to promote a nearby real estate development. As Seattle grew, its zoo engendered civic pride and the animals in its growing collection became local personalities. By the 1970s, the zoo emerged as an international pioneer in zoo design. Lavishly illustrated, Woodland provides a narrative of changing ideas about the relationship between humans and animals, and a fond look at the zoo’s animals and the people who care for them.

This collection pulls together key documents from the scientific and political history of climate change, including congressional testimony, scientific papers, newspaper editorials, court cases, and international declarations. Far more than just a compendium of source materials, the book uses these documents as a way to think about history, while at the same time using history as a way to approach the politics of climate change from a new perspective.

Taken together, these nine original artist interviews, cutting-edge visual artworks, and seven critical essays explore contemporary currents and experiences within Asian American art, including the multiple axes of race and identity; queer bodies and forms; kinship and affect; and digital identities and performances.

May 6 at 11 a.m., Eileen Bjorkman, The Propeller under the Bed, Book signing and fly-in at Harvey Field, Snohomish, WA