In May we received exciting news from Western Washington University: the Western Reads committee has chosen a University of Washington Press book, Tulalip, From My Heart: An Autobiographical Account of a Reservation Community, by Harriette Shelton Dover, as their common book for the 2017–18 school year. The committee selected this book by a Tulalip elder in consultation with Indigenous people on and off campus to commemorate the 1969 “Right to be Indian” conference. This gathering drew tribal members from across the region in support of young people working to improve their communities through social and political self-determination. Now, as we approach the conference’s fiftieth anniversary, more than 4,000 incoming Western students, faculty, and staff will engage with Tulalip, From My Heart, Dover’s remarkable story about her tribe’s history, struggles, and powerful ties to land now occupied by others. 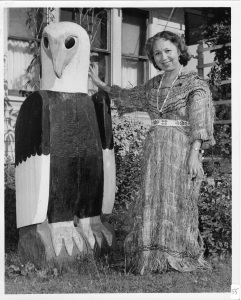 Dawn Dietrich, associate professor and director of the Western Reads program, shared her enthusiasm for this selection as a way of fostering collaboration and relationship building around Native American education. The choice of this common book “honors the Coast Salish traditions that defined, and continue to define, this region,” Dietrich told us.

UW Press has played an important role in publishing the stories of Native American and Indigenous communities for almost 100 years. Our list includes memoirs by Coast Salish and Alaska Native writers, tribal dictionaries and grammars, books about Native American art and culture, as well as new work presenting contemporary issues from decolonizing perspectives. Our books are enjoyed by general readers, taught in classes, found in libraries of tribal colleges, and used by scholars and artists in many disciplines.

The Western Reads common book selection is just one example of how communities and readers engage with the work we publish. Another is Promised Land, a new documentary about the Duwamish and Chinook fight for treaty recognition. Several UW Press books “formed the academic framework of the film’s narrative,” as filmmaker Sarah Samudre Salcedo puts it, including Coll Thrush’s Native Seattle: Histories from the Crossing-Over Place, Robert T. Boyd, Kenneth Ames, and Tony Johnson’s Chinookan Peoples of the Lower Columbia, and Jon Daehnke’s forthcoming Chinook Resilience: Heritage and Cultural Revitalization on the Lower Columbia River. The Seattle Theatre Group will present Promised Land on July 6, 2017, at the Neptune Theatre. The screening is free and open to the public and will include a preshow discussion with representatives from the tribes. We hope you can join us.

UW Press is dedicated to publishing books that help communities engage in shared conversations and inform new art and scholarship. We are proud to bring important stories and ideas to life for current and future generations.

We invite you to browse our new and forthcoming Native American and Indigenous publications and other recent catalogs on our website.

1 thought on “From the Desk of the Director: Books in Common”