This Asian/Pacific American Heritage Month we are excited to share special features with authors and editors of new and recent titles that celebrate Asian and Pacific Islanders in the United States.

Today we feature a guest post from The Hope of Another Spring: Takuichi Fujii, Artist and Wartime Witness author Barbara Johns exploring some of the most powerful and intriguing pieces by Issei artist Takuichi Fujii (1891-1964).

Her book, published this spring, reveals Fujii’s life story and work and gives a telling alternative view of the wartime ordeal of West Coast Japanese Americans. The centerpiece of Fujii’s large and heretofore unknown collection is his illustrated diary, which historian Roger Daniels calls “the most remarkable document created by a Japanese American prisoner during the wartime incarceration.”

Please join us to celebrate the publication of The Hope of Another Spring at these events:

The Washington State History Museum in Tacoma will present the corresponding exhibition, Witness to Wartime: Takuichi Fujii, from September 21, 2017 – January 4, 2018.

After the exhibition closes in Tacoma, it will travel to the Alexandria Museum of Art in Alexandria, LA from March 1 – June 27, 2018.

Takuichi Fujii (1891-1964), Chicago, ca. 1953. Fujii, pictured here in his early sixties, moved to Chicago after World War II. During the war Chicago became the center of Japanese America as the result of the War Relocation Authority’s resettlement policy. Fujii moved to the city after the war and spent the remainder of his life there. 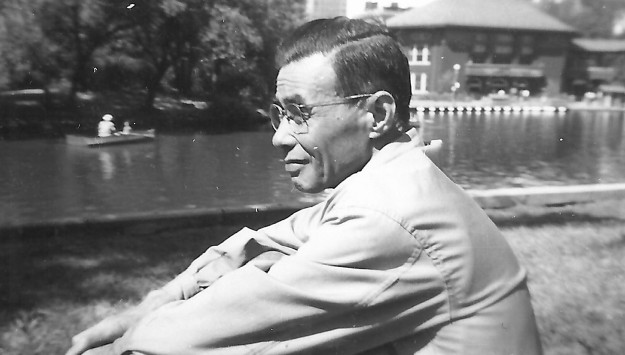 Fujii, High School Girl, ca. 1934-1935. Fujii immigrated from Hiroshima to Seattle at the age of fifteen, established a small fish sales business, and by the 1930s was a well-recognized artist. This painting pictures his daughter, a student at Broadway High School.

Fujii, Evacuation, 1942. Executive Order 9066, issued on February 19, 1942, authorized the army to establish military zones “from which any or all persons may be excluded,” targeting although not naming persons of Japanese ancestry. The mass forced removal began in late March, and by June, more than 110,000 Japanese Americans on the West Coast were incarcerated under armed guard. Fujii began an illustrated diary that he would keep throughout the war, and here, shows his family leaving home. 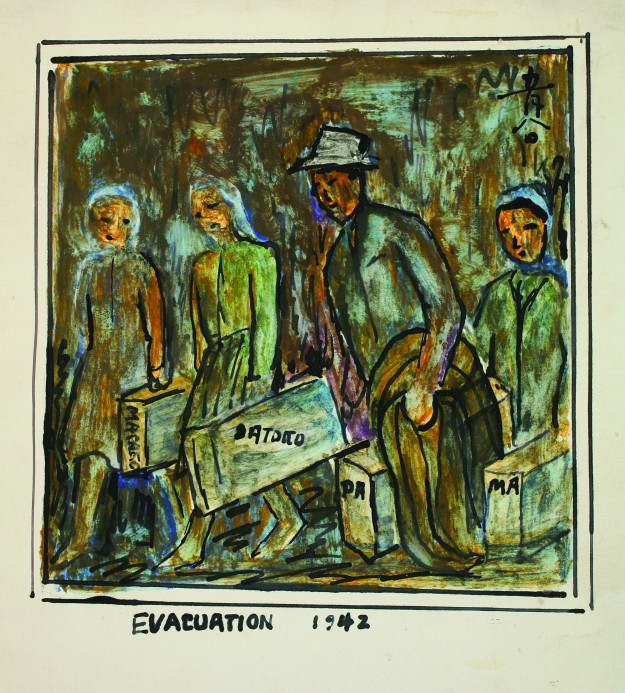 Fujii, Diary entry, 1942. Fujii wrote, “We arrived at the Puyallup Assembly Center. Those who had been sent here earlier greeted us from inside the barbed wire.” Fujii’s diary, nearly four hundred pages of text and images, gives a detailed account of the “camp” experience from an inmate’s perspective. 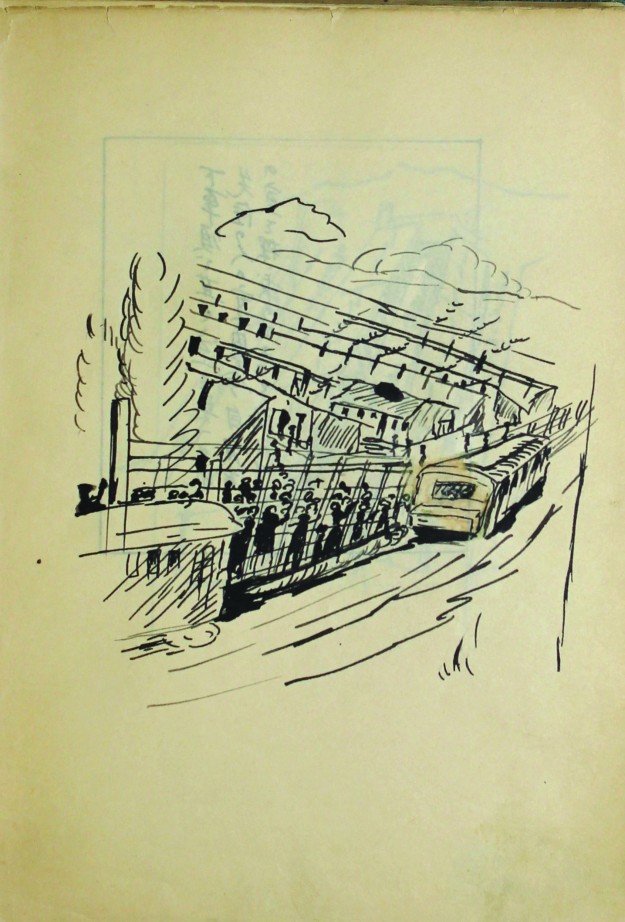 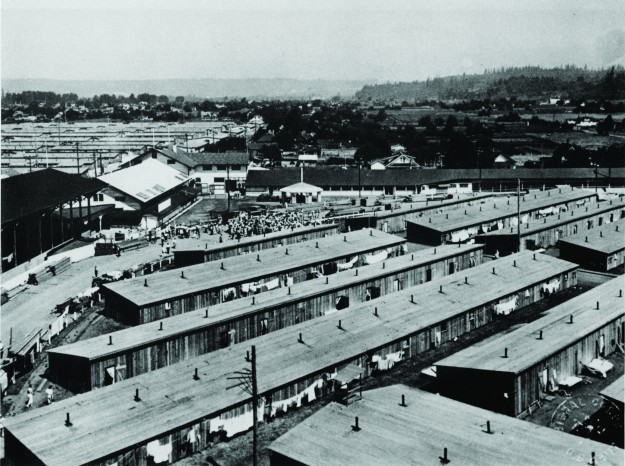 Fujii, Puyallup Assembly Center. In addition to his diary, Fujii produced well over one hundred watercolors that replicate or complement the diary drawings. He writes in the diary entry on which this watercolor is based, “The south side of the camp: the place where there was a tall watchtower.” His drawings and watercolors repeatedly trace the means of confinement and specify his viewpoint, positioning him as a witness.

Watercolor on paper, 4 x 6 in. Sandy and Terry Kita Collection.

Fujii, Puyallup Assembly Center, man standing by barracks. This watercolor enlarges a detail from the diary drawing, as Fujii continued to reflect on his experience.

Watercolor on paper, 14 x 10 in. Sandy and Terry Kita Collection.

Fujii, Minidoka War Relocation Authority camp. Minidoka occupied 950 acres of desert land in south-central Idaho and at its peak, housed over 9,000 Japanese Americans. This painting is one of three related images to picture this portion of the fence, including the tumultuous montage on the cover of The Hope of Another Spring. Fujii’s diary reads, “This is the barbed wire and [the scene] around Block 24.”

Fujii, Minidoka, pounding mochi for New Year’s day. At the end of December 1942, two generations of men pound steamed rice for mochi in preparation for the first New Year at Minidoka. An Issei, or immigrant-generation Japanese, he often contrasts his and the younger generation in his diary, but here, he describes their shared social celebration as “we pounded the [mochi] shouting enthusiastically.”

Fujii, Minidoka, drawing by flashlight. Fujii pictures himself in usual perspective as he draws inside his barrack, as if to make the viewer a witness alongside him.

Fujii, double portrait of himself and his wife, Fusano (on the left), ca. 1943-1945. This unique sculpted pair shows the strong, supportive union between Fujii and his wife. The dimensions suggest the wood was scavenged from fence posts when a portion of the hated barbed-wire fence was dismantled.

Fujii, Diary entry, Minidoka, October 2, 1945. Fujii and his wife, having received eviction papers, await their departure from Minidoka to an unknown future. He describes the acute anxiety aroused by the announcement of the closure of the camps in 1945, particularly among the Issei, who had lost their homes, farms and businesses, possessions, and, for many of them, their health.  His diary is exceptional in recording his experience from the forced removal in 1942 to his leaving Minidoka as the camp closed.

Fujii, abstraction, early 1960s. Moving to Chicago after the war, Fujii continued to paint and experimented with abstraction in a broad range of styles. His work culminated in a series of bold, dynamic black and white abstractions in the last years of his life. 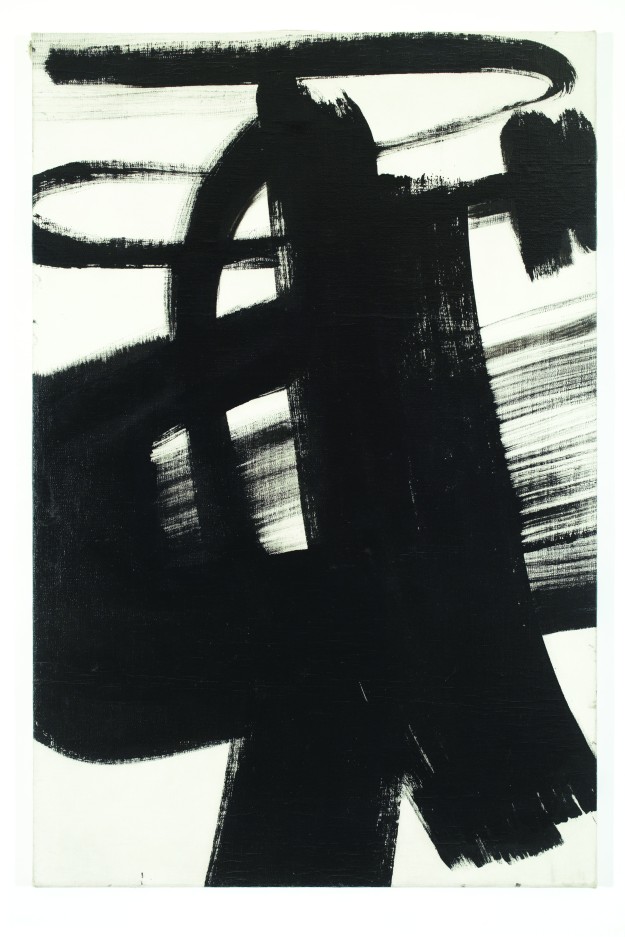 Barbara Johns, PhD, is a Seattle-based art historian and curator. Her previous books include Signs of Home: The Paintings and Wartime Diary of Kamekichi Tokita, Paul Horiuchi: East and West, Jet Dreams: Art of the Fifties in the Northwest, and Anne Gould Hauberg: Fired by Beauty.