International Polar Bear Day, which falls every year on February 27, raises awareness about the conservation status of polar bears in a warming Arctic. In this guest post, Ice Bear author Michael Engelhard shares this photo essay about the history of polar bears kept in zoos.

In the western hemisphere, polar bears have lived in our midst since the Middle Ages, a result of our fascination with these charismatic carnivores. From their very beginnings as cultural institutions, zoos have tried to balance entertainment and education. Today, with climate change and habitat loss from development threatening the polar bear’s natural habitat, many have added conservation to their mission, with captive breeding programs and scientific research. This gallery offers a brief stroll through zoos past and present, a glimpse at how we have kept and presented the Arctic White Bear.

The menagerie in the Tower of London, one of Europe’s oldest and longest-operating zoos, in an illustration from 1808. Already in 1252, Henry III of England kept a muzzled and chained polar bear there, which was allowed to catch fish and frolic about in the Thames.

Polito’s Royal Menagerie at the Exeter ’Change in London, 1812. A collection of exotic animals owned by Stephen Polito, a touring showman in Georgian England of Italian descent who had come from his own country to find fortune in London and the provinces. The artist Edwin Landseer came here to study and paint polar bears “true to life.” 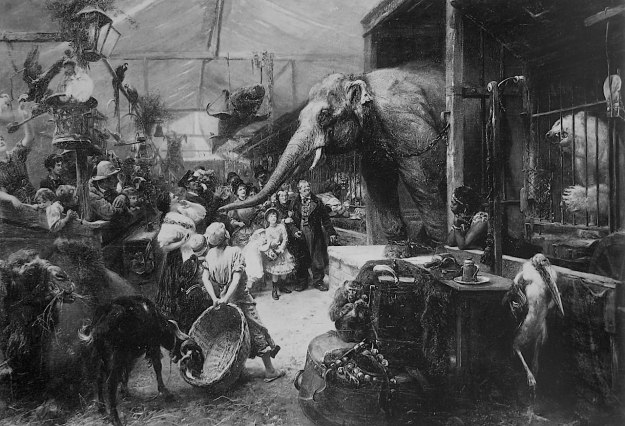 Print after Paul Meyerheim’s painting from 1885 of a Tierbude, a German traveling menagerie, a hybrid of circus and zoo. Such “shows” sometimes included taxidermy exhibits. The polar bear in the wagon on the right appears to be rather stressed by its confinement. 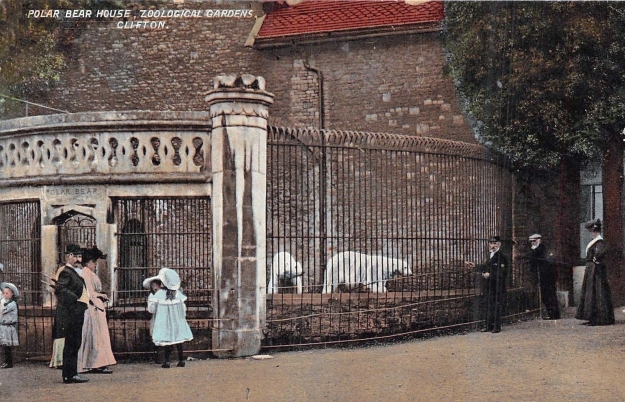 Polar bear house at the Bristol Zoo. Founded in 1835, the Bristol Zoo and England Zoological Society set out to facilitate “the observation of habits, form and structure of the animal kingdom, as well as affording rational amusement and recreation to the visitors of the neighbourhood.”

The German showman and animal trader Carl Hagenbeck revolutionized wildlife displays with more natural-looking settings. In his unfenced “Northland Panorama” at the Stellingen-Hamburg Tierpark—shown here in 1910—species seemed to coexist harmoniously, but were separated by moats invisible to visitors.

In 1933, the purpose-designed polar bear enclosure of Munich’s Hellabrunn zoo comprised a semi-circular curved swimming pool and a wide platform with rising terraces. The back wall, which had openings leading to the polar bears’ night quarters, was covered with artificial rock to replicate the Arctic environment.

Sadly, unhealthy and dreary polar bear enclosures such as this still exist. Chile’s only polar bear “Taco” died in 2015 at the age of 18 at the National Zoo in Santiago. For years, activists protested its captivity in the capital with blockades and burning barricades. 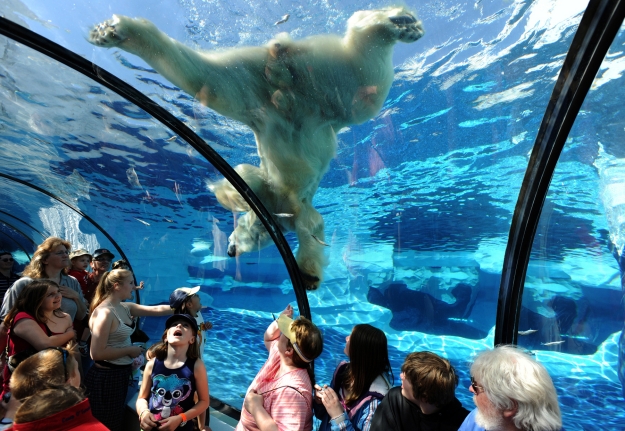 Zoo design has come a long way, as is obvious from this truly immersive experience at the Detroit Zoo. Modern zoos seek to give visitors an understanding of the bear in its home environment, while also considering the animals’ well-being.

Michael Engelhard works as a wilderness guide in Arctic Alaska and holds an MA in cultural anthropology from the University of Alaska Fairbanks. His books include Where the Rain Children Sleep: A Sacred Geography of the Colorado Plateau, the anthology Wild Moments: Adventures with Animals of the North, and a recent essay collection, American Wild: Explorations from the Grand Canyon to the Arctic Ocean. His writing has also appeared in Sierra, Outside, Audubon, National Wildlife, National Parks, High Country News, and the San Francisco Chronicle.