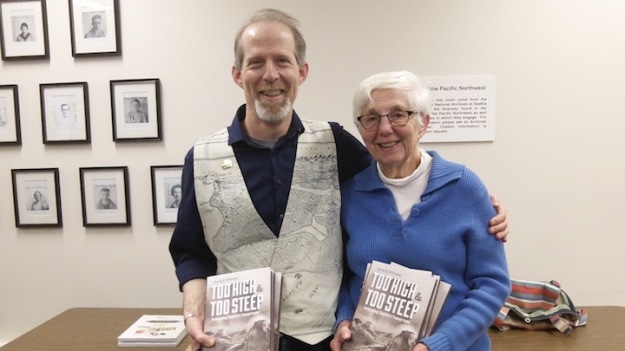 Author David B. Williams with his mom and fellow author, Jacqueline B. Williams (Photo via AKCHO)

Congratulations to David B. Williams, winner of the 2016 Association of King County Historical Organizations (AKCHO) Virginia Marie Folkins Award for Too High and Too Steep. The awards event will be held on Tuesday, June 7, 5:30-8:30 p.m., at the Northwest African American Museum. Read more at the AKCHO site.

Carla Nappi of New Books Network interviews Paul Rouzer about On Cold Mountain: “It’s a fascinating book that’s a pleasure to read for both specialist and general readers.”

The Seeing Nature exhibition gets some early love from the Seattle Times staff in an article on Seattle Art Museum’s annual preview luncheon. (Opening at SAM on February 16, 2017.) The catalog is also reviewed by Amy Henderson at Artes Magazine: “Allen’s collection of landscape paintings is beautifully arranged at the Phillips.”

Colleen Mondor reviews Alaska’s Skyboys by Katherine Johnson Ringsmuth in Alaska Dispatch News: “Ringsmuth’s thoroughly engaging look at the development of this phenomenon is a fascinating peek at how uniquely American the Alaska bush pilot truly is.”

Radical Theatrics by Craig L. Peariso is reviewed by Max Shulman in TDR: The Drama Review: “Craig J. Peariso’s work challenges traditional narratives regarding some of North America’s most significant political iconoclasts of the 1960s.”

James Longhurst‘s Bike Battles is reviewed by Joshua Lupkin in the Journal of American History: “Longhurst has provided an accessible and highly readable story of the bicycle. . . . [He] has taken us on a legal and cultural ramble on the American road as well as given us a useful model of engaged and responsible urban history scholarship.”

Theresa L. Gregor reviews A Chemehuevi Song by Clifford E. Trafzer in Southern California Quarterly: “[A Chemehuevi Song] represents the highest level of academic and community collaboration. . . [It] is the embodiment of an intellectual and cultural relationship that combines an astute analysis from the historian/ethnographer with a melody of rare tribal voices sharing the lived realities—both past and present—that Chemehuevi people experienced, survived, and relied upon to create the cultural resilience they are experiencing today.”

The Spring 2016 issue of Oregon Historical Quarterly features an article by Chinookan Peoples of the Lower Columbia coeditor Robert T. Boyd and a review of Idaho’s Place edited by Adam Sowards: “[A] guidebook to recent interpretations of the state’s history. For scholars teaching and researching Northwest history, the volume provides an informed way-station to advancing understanding of the region.”—William G. Robbins

Warnings against Myself: Meditations on a Life in Climbing
By David Stevenson

From his youthful second ascent of the north ridge of Mount Kennedy in the Yukon’s Saint Elias Range, an in-and-out on skis for which he had not entirely learned how to ski, to a recent excursion across the Harding Icefield conceived under the influence of rain and whiskey, David Stevenson chronicles several decades of a life unified by a preoccupation with climbing. Reflective and literary, and also entertaining and funny, his accounts move across the great climbing locations of the western United States, with forays into the spires of the Alps, and slip freely in time from the author’s childhood, when he could not wait to head west, to his adulthood, with a wife and two sons, in which he still feels compelled by a longing to be on the heights.

She begins in Vancouver, established as a fur trade emporium on a plain above the Columbia River, and ends with Bellevue, a bedroom community turned edge city. In between, readers crisscross the state, with walks through urban Olympia, Walla Walla, Tacoma, Seattle, Everett, Bellingham, Yakima, and Spokane.

In Power Interrupted, Sylvanna M. Falcón redirects the conversation about UN-based feminist activism toward UN forums on racism. Her analysis of UN antiracism spaces, in particular the 2001 World Conference against Racism, Racial Discrimination, Xenophobia, and Related Intolerance in Durban, South Africa, considers how a race and gender intersectionality approach broadened opportunities for feminist organizing at the global level. The Durban conference gave feminist activists a pivotal opportunity to expand the debate about the ongoing challenges of global racism, which had largely privileged men’s experiences with racial injustice. When including the activist engagements and experiential knowledge of these antiracist feminist communities, the political significance of human rights becomes evident. Using a combination of interviews, participant observation, and extensive archival data, Falcón situates contemporary antiracist feminist organizing from the Americas–specifically the activism of feminists of color from the United States and Canada, and feminists from Mexico and Peru–alongside a critical historical reading of the UN and its agenda against racism.

Combining histories of Portland, Oregon’s Albina District and its African American community with interviews with former Portland Panthers and other key players, this long-overdue account adds complexity to our understanding of the protracted civil rights movement throughout the Pacific Northwest. As Lucas Burke and Judson Jeffries reveal, the Portland branch of the Black Panther Party was quite different from the more famous—and infamous—Oakland headquarters. Instead of parading through the streets wearing black berets and ammunition belts, Portland’s Panthers were more concerned with opening a health clinic and starting free breakfast programs for neighborhood kids. Though the group had been squeezed out of local politics by the early 1980s, its legacy lives on through the various activist groups in Portland that are still fighting many of the same battles.

Counterpunch: The Cultural Battles over Heavyweight Prizefighting in the American West
By Meg Frisbee

Historian Meg Frisbee examines how boxing’s meteoric rise in popularity in the West ran concurrently with a growing backlash among Progressive Era social reformers who saw boxing as barbaric. These tensions created a morality war that pitted state officials against city leaders, boxing promoters against social reformers, and fans against religious groups. Frisbee focuses on several legendary heavyweight prizefights of the period and the protests they inspired to explain why western geography, economy, and culture ultimately helped the sport’s supporters defeat its detractors.

Japanese Prostitutes in the North American West, 1887-1920
By Kazuhiro Oharazeki

This compelling study of a previously overlooked vice industry explores the larger structural forces that led to the growth of prostitution in Japan, the Pacific region, and the North American West at the turn of the twentieth century. Combining very personal accounts with never before examined Japanese sources, historian Kazuhiro Oharazeki sheds new light on Japanese American immigration and labor histories and opens a fascinating window into the development of the American West.

Asians in Colorado: A History of Persecution and Perseverance in the Centennial State
By William Wei

Providing the most comprehensive examination to date of Asians in the Centennial State, William Wei addresses a wide range of experiences, from anti-Chinese riots in late nineteenth-century Denver to the World War II incarceration of Japanese Americans at the Amache concentration camp to the more recent influx of Southeast Asian refugees and South Asian tech professionals. Drawing on a wealth of historical sources, Wei reconstructs what life was like for the early Chinese and Japanese pioneers, and he pays special attention to the different challenges faced by those in urban versus rural areas. The result is a groundbreaking approach that helps us better understand how Asians survived—and thrived—in an often hostile environment.

The Afterlife of Sai Baba: Competing Visions of a Global Saint
By Karline McLain

Tracing his rise from small village guru to global phenomenon, religious studies scholar Karline McLain uses a wide range of sources to investigate the different ways that Sai Baba has been understood in South Asia and beyond and the reasons behind his skyrocketing popularity among Hindus in particular. Shining a spotlight on an incredibly forceful devotional movement that avoids fundamental politics and emphasizes unity, service, and peace, The Afterlife of Sai Baba is an entertaining—and enlightening—look at one of South Asia’s most popular spiritual gurus.

Enclaves along the India-Bangladesh border have posed conceptual and pragmatic challenges to both states since Partition in 1947. These pieces of India inside of Bangladesh, and vice versa, are spaces in which national security, belonging, and control are shown in sharp relief. Through ethnographic and historical analysis, Jason Cons argues that these spaces are key locations for rethinking the production of territory in South Asia today. Sensitive Space examines the ways that these areas mark a range of anxieties over territory, land, and national survival and lead us to consider why certain places emerge as contentious, and often violent, spaces at the margins of nation and state.

The Gender of Caste: Representing Dalits in Print
By Charu Gupta

Caste and gender are complex markers of difference that have traditionally been addressed in isolation from each other, with a presumptive maleness present in most studies of Dalits (“untouchables”) and a presumptive upper-casteness in many feminist studies. In this study of the representations of Dalits in the print culture of colonial north India, Charu Gupta enters new territory by looking at images of Dalit women as both victims and vamps, the construction of Dalit masculinities, religious conversion as an alternative to entrapment in the Hindu caste system, and the plight of indentured labor.

The Letter to Ren An and Sima Qian’s Legacy
By Stephen Durrant, Wai-Yee Li, Michael Nylan, and Hans van Ess

Sima Qian (first century BCE), the author of Record of the Historian (Shiji), is China’s earliest and best-known historian, and his “Letter to Ren An” is the most famous letter in Chinese history. In the letter, Sima Qian explains his decision to finish his life’s work, the first comprehensive history of China, instead of honorably committing suicide following his castration for “deceiving the emperor.” In the twentieth and twenty-first centuries, some scholars have queried the authenticity of the letter. Is it a genuine piece of writing by Sima Qian or an early work of literary impersonation? The Letter to Ren An and Sima Qian’s Legacy provides a full translation of the letter and uses different methods to explore issues in textual history. It also shows how ideas about friendship, loyalty, factionalism, and authorship encoded in the letter have far-reaching implications for the study of China

Heroines of the Qing: Exemplary Women Tell Their Stories
By Binbin Yang

Heroines of the Qing introduces an array of Chinese women from the eighteenth and nineteenth centuries who were powerful, active subjects of their own lives and who wrote themselves as the heroines of their exemplary stories. Traditionally, “exemplary women” (lienu)–heroic martyrs, chaste widows, and faithful maidens, for example–were written into official dynastic histories for their unrelenting adherence to female virtue by Confucian family standards. However, despite the rich writing traditions about these women, their lives were often distorted by moral and cultural agendas. Binbin Yang, drawing on interdisciplinary sources, shows how they were able to cross boundaries that were typically closed to women-boundaries not only of gender, but also of knowledge, economic power, political engagement, and ritual and cultural authority.

A translation of the award-winning Thai-language children’s novel Luk Mae Nam Khong (2001), Mekong Kids is the heartwarming story of a tubby, fifth-grade boy named Boom, who lives in northeastern Thailand in a village along the Mekong River.

David B. Williams, Too High and Too Steep, Eastlake Community Council, TOPS-Seward School, May 10, 7 p.m.

Melinda Bargreen (Classical Seattle), Ana Maria Spagna (Reclaimers), and David B. Williams (Too High and Too Steep), Literary Voices, University of Washington Libraries, May 14, 6-9:30 p.m. ($150 per person or $1,500 per table)

David B. Williams, Too High and Too Steep, University of Washington Faculty Auxiliary Club, May 25, 9:30 a.m.