This year marks the 50th anniversary of the Immigration and Nationality Act of 1965 (also referred to as the Hart-Cellar Act). This landmark legislation was signed by President Lyndon B. Johnson and abolished country based quotas as the basis for immigration. It prioritized instead skills and family reunification, opening the doors to new waves of immigrants from Asia, Africa, and other parts of the world that had been previously restricted. In this guest post, Nalini Iyer and Amy Bhatt, authors of Roots and Reflections: South Asians in the Pacific Northwest reflect on that change and preview some of the celebrations and commemorations that will take place in the coming year.

Fifty years ago, the Immigration and Nationality Act was a major source of contention in Congress as many feared that too many foreigners would change the fabric of the American nation and create too much competition for jobs. As a way to assuage these fears, several prominent politicians of the day (including Robert Kennedy) predicted that there would be minimal impact on immigration from the Asia Pacific triangle and suggested that we might see about 5,000 immigrants from the region in the first year and not much after that.

However, the legislators of the time were way off the mark in their demographic predictions. After the bill was passed, the numbers of immigrations from South Asia rose immensely. Between 1961-1970, India only sent 31,200 immigrants to the United States and Pakistan sent 4,900, but through the 1970s, the numbers increased to 176,800 immigrants from India and 157,000 from Pakistan/Bangladesh. By the 2000s, 157,000 Pakistanis and 106,700 Bangladeshis arrived and between 2001 and 2010, 662,500 Indians acquired legal permanent resident status[1]. Without a doubt, the Immigration and Nationality Act and the waves of immigration from South Asia that followed, have transformed the racial, economic, social, and political fabric of this country. 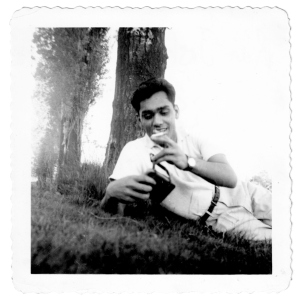 Raj Joshi as a graduate student at the University of Washington campus, Seattle, 1955.

While numbers tell us about demographic change wrought by policy reform, behind each of those numbers is a vast array of stories that are the heart and soul of immigration and settlement. Roots and Reflections: South Asians in the Pacific Northwest explores the stories of individual immigrants and tells us more about who migrated, why they left, how they came, and what their dreams and aspirations were. Though the book spans the stories of those who had come before the 1965 Act and many others who came after, their stories give insight into what it was like to make a new home in a new land.

Whereas the predominant perception of these immigrants is that of wealthy tech entrepreneurs, a closer look at the community reveals a heterogeneous population of small business owners, educators, artists, refugees, tech workers, and service industry workers who were drawn to the region because of educational and work opportunities, the beautiful landscape, and kinship and community networks. What has been clear is that these individuals have made significant contributions to their host countries. People like Rao Remala, the first Indian to work at Microsoft, or Raj Joshi, the first South Asian superintendent of the Seattle Public School system, have paved the way for new waves of South Asians to make an impact. Kshama Sewant’s recent election to the Seattle City Council and Pramila Jayapal’s bid for a state Senate seat are the fruits of that legacy.

Today, half a century after the passage of the Immigration and Nationality Act, immigration reform remains at the forefront of the national discussion. From Arizona’s restrictive state laws on immigration to the large numbers of unaccompanied minors fleeing Central America, immigration issues have dominated the national conversation. Although 1965 brought about radical reform to immigration, it also generated new sets of concerns for immigrants and employers alike.

For South Asians, the long and difficult process of obtaining permanent residency and/or citizenship continues to present a major challenge. In the Pacific Northwest, many immigrants arrive as educated workers in STEM fields on temporary worker visas (H-1B) that preclude them from establishing lives in this country. This is partly because U.S. law limits any single country to no more than 7% of the employment based permanent resident visas (green cards), so skilled workers from India find themselves waiting many years to obtain a green card. While country based quotas may have

disappeared in some regards, they remain in effect when it comes to permanent residency. In many ways, the 1965 Act was pivotal to changing American society, and yet, many of the same debates and issues that haunted its passage remain unresolved today.

For now, we continue to commemorate this landmark legislation and to critically evaluate its impact on various Asian American communities. In March 2015, the Wing Luke Museum will host an exhibit on the Act. The Seattle Repertory Theater will be presenting two plays in its 2014-15 season—All the Way and The Great Society—based on the life of President Lyndon B. Johnson and his presidency in the 1960s. These celebrations help us remember the legacy of 1965 Act and the profound changes it introduced to American society.

Amy Bhatt is assistant professor of gender and women’s studies at the University of Maryland, Baltimore County. Nalini Iyer is professor of English at Seattle University.

1 thought on “Fifty Years of the Immigration and Nationality Act: Guest Post by Nalini Iyer and Amy Bhatt”