Learn more about Washington’s urban history and celebrate the publication of Walking Washington’s History at these author events:

In keeping with the summer plan to try out the various walks featured in Judy Bentley’s book, I volunteered for the next outing. Since I’m new to Washington State and have a car, my colleagues suggested Bellingham. Bentley wrote that Bellingham is a combination of four villages, Whatcom-Sehome-Bellingham-Fairhaven, that “grew along the waterfront of Bellingham Bay and rode every boom and bust that swept the Pacific Northwest in the late 1800s and early 1900s.” The villages eventually merged together and took the name of the bay as their own. The cornerstone markers along the route, like the one between Whatcom and Fairhaven, highlight the historical boundaries of where one town ended and the other began.

The Bellingham Loop is seven miles roundtrip (may be done in parts) and the Extended Walk: South Hill and Western Washington University is three miles one-way, with elevation gain. As luck would have it, this walk is the longest one in the book. Along with two family friends, I opted for the middle part of the loop.

On Saturdays, Depot Market Square hosts the farmer’s market. When we got there, it looked like a bike race had completed earlier in the day with portable bike racks still out on Railroad Avenue. The square is a great place to people-watch, check out the market, talk to artisans, and eat a diverse array of foods from local restaurants. A woman spun sheared wool into knitting yarn. I ate a meat pie with a light and flaky crust but could have just as easily eaten pad Thai, curry, or jerk chicken. A band from New Orleans played an eclectic mix of brass and banjo and sold cold coffee in small milk cartons. 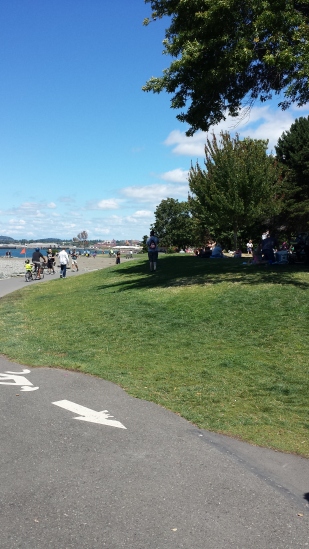 South Bay Trail, which is a mix of gravel and paved sections, was pretty busy; it seemed to be a great way to go between the Whatcom-Sehome village and Fairhaven village. There were casual strollers and runners, mixed in with bicyclists and cruisers going in either direction. There are numbered markers, going in descending order and about knee-high, that tell more of Bellingham’s history. 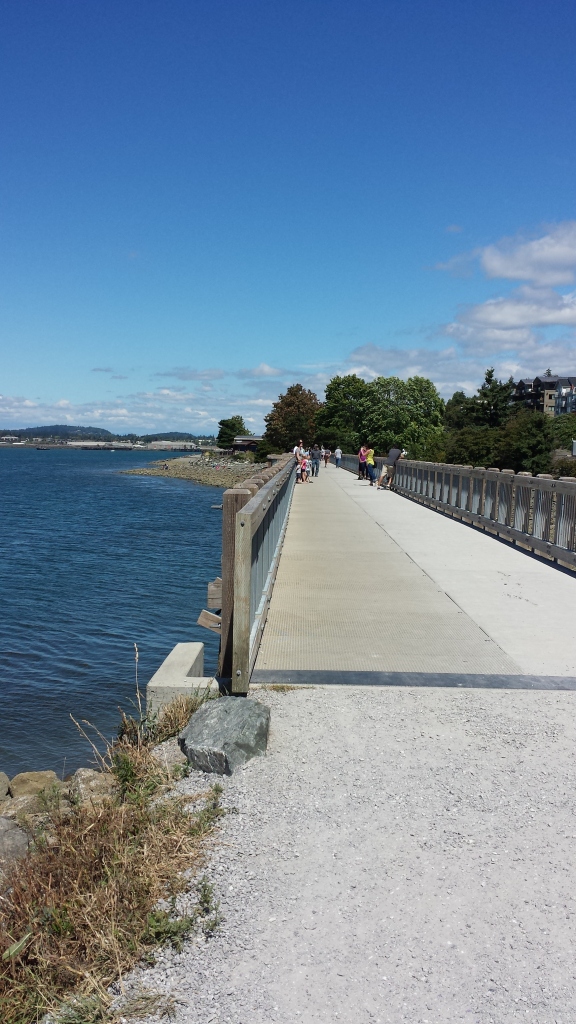 Boulevard Park breaks up the South Bay Trail. People lounged in the sun, played in the sand, and tried to catch Pokémon. Yes, while children played on a pirate ship in the playground, adults walked around playing Pokémon Go. The south end of Boulevard Park is where South Bay Trail becomes a boardwalk. This was my favorite part of the trail because as Bentley explained, “the boardwalk derives from a railroad trestle built out over the water on pilings.” We sat on one of many benches and watched sailboats framed against the San Juan Islands, the waters of Bellingham Bay beneath our feet. Then we continued the walk past another cornerstone marker that delineated the boundary between old Bellingham and Fairhaven.

I diverged from the book’s route at Harris Avenue, named for “Dirty” Daniel Harris, the village’s first settler, to check out Village Books and explore its café and three floors of books (don’t forget to check out the dedicated UW Press space within the store). Fairhaven Village Green, located immediately behind the store, was also hosting a steampunk fair. I tried a variety of balsamic vinegars at the Drizzle Olive Oil and Vinegar Tasting Room, one of several boutiques next to the bookstore, and bumped into J.J. Donovan’s bronzed statue sitting on a bench. Bentley wrote, “Donovan, who had his hand in almost everything—coal mines, railroads, lumber mills, and a library, hospital, college, and church—is regarded as the most important man in Fairhaven history.”

Walking became driving when we headed up the hill to Western Washington University, where we explored the campus arboretum, saw Old Main, and walked around Red Square and Fisher Fountain. We also saw a number of art sculptures that are placed throughout the campus, before we drove back down the hill to Whatcom-Sehome.

We ended our visit to Bellingham at the Mount Baker Building and the Mount Baker Theatre, a beautifully restored 1927 theater. We had fun exploring the history of Bellingham (Whatcom-Sehome-Bellingham-Fairhaven) and highly recommend Walking Washington’s History for those eager to see more of our region’s past in the present!