October is Filipino American History Month and there are a number of events celebrating this heritage in the Northwest and beyond. This year also marks the centennial of Carlos Bulosan‘s birth, and a series of events—including the “Empire is in the Heart” conference at the University of Washington—seek to celebrate his place in American literary and labor history. The University of Washington Press is proud to be the publisher of a number of history and literature titles that shed light on multiple aspects of the Filipino American experience:

America Is in the Heart: A Personal History
By Carlos Bulosan
New introduction by Marilyn Alquizola and Lane Ryo Hirabayashi

First published in 1943, this classic memoir by well-known Filipino poet Carlos Bulosan describes his boyhood in the Philippines, his voyage to America, and his years of hardship and despair as an itinerant laborer following the harvest trail in the rural West. Read an excerpt from the new edition here.

All the Conspirators
By Carlos Bulosan; introduction by Caroline S. Hau and Benedict Anderson

In this thriller set at the end of World War II, American Gar Stanley returns to his native Philippines to help his childhood sweetheart locate her missing husband in the wake of a Japanese ambush. With Clem’s ring as his only clue, Gar moves from the nightclubs of Manila to the mountains of Baguio, from mansions to hovels, bordellos to churches. He pursues and is pursued by bankers, matrons, hoboes, warriors, and thugs. Gar quickly realizes that no one is who they seem in this war-ravaged country. He must move quickly to stay ahead of the deadly conspirators before they silence his friend.

Growing Up Brown: Memoirs of a Filipino American
By Peter Jamero, foreword by Dorothy Laigo Cordova

Peter Jamero’s story of hardship and success illuminates the experience of what he calls the “bridge generation” — the American-born children of the Filipinos recruited as farm workers in the 1920s and ’30s. Their experiences span the gap between these early immigrants and those Filipinos who owe their U.S. residency to the liberalization of immigration laws in 1965. His book is a sequel of sorts to Carlos Bulosan’s America Is in the Heart, with themes of heartbreaking struggle against racism and poverty and eventual triumph. 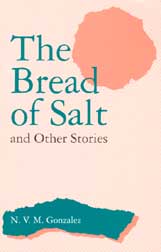 The Bread of Salt and Other Stories
By N. V. M. Gonzalez

Long considered the dean of modern Philippine literature, N. V. M. Gonzalez influenced an entire generation of young Philippine writers and acquired a devoted international readership. His books, however, are not widely available in this country.The Bread of Salt and Other Stories provides a retrospective selection of sixteen of his short stories (all originally written in English), arranged in order of their writing, from the early 1950s to the present day. This is a powerful collection, both for the unity and universality of the author’s subjects and themes and for the distinctive character of his prose style. 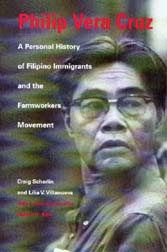 Philip Vera Cruz: A Personal History of Filipino Immigrants and the Farmworkers Movement
By Craig Scharlin and Lilia V. Villanueva

Filipino farmworkers sat down in the grape fields of Delano, California, in 1965 and began the strike that brought about a dramatic turn in the long history of farm labor struggles in California. Their efforts led to the creation of the United Farm Workers union under Cesar Chavez, with Philip Vera Cruz as its vice president and highest-ranking Filipino officer. In his deeply reflective and thought-provoking oral memoir, Vera Cruz explores the toll these conditions took on both families and individuals. 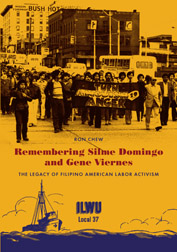 Remembering Silme Domingo and Gene Viernes examines the lives of two slain cannery union reformers during the tumultuous Civil Rights Era of the 1970s. Author Ron Chew was a close friend of Gene and Silme, and his poignant prologue sets the stage for the story of their political awakening, the events that led to their tragic deaths, and the movement they nurtured. Through memories of family and friends, we learn about the men as second-generation Filipino Americans, as leaders, and as part of a generation striving to make America live up to its democratic ideals. The book includes a history of Asian labor in the Alaska salmon canneries written by Gene Viernes. He intended to publish this work to illuminate the contributions of cannery workers and the noble fight to create a union. 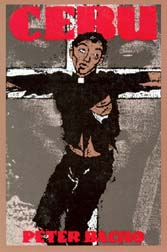 This remarkable first novel follows the struggle of Ben Lucero, a young Filipino American priest who must come to terms with his bifurcated notion of home as well as his own religious commitment. Ben’s first visit to the city of Cebu in the Philippines, for his mother’s burial, becomes the occasion of his corruption when he is confronted with the manipulative wiles of two enigmatic women, his powerful Aunt Clara and her glamorous young business associate, Ellen. Ben is inherently corruptible, but his moment of truth is advanced by what he sees as a perversion of Catholicism, namely the crucifixion as a means of bargaining with God. Despair, guilt, and their religious corollary, the need for redemption, follow Ben back to Seattle, where he attempts to unravel his existential dilemma. 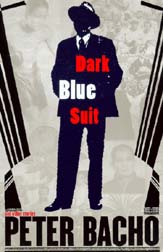 Dark Blue Suit and Other Stories
By Peter Bacho

The book opens with the annual spring dispatch, by the Seattle-based Filipino union, of thousands of Filipino workers to the Alaska salmon canneries. We meet characters who reappear throughout the stories: Vince, the tough but charming union foreman and “big shot” father to Buddy, our American-born narrator; Chris, the battle-scarred union president targeted by McCarthyism; Rico, the spirited young king of the neighborhood who will fall victim to Vietnam; Stephanie, the beautiful mestiza who married up. There are many others who age and change in ironic counterpoint to persistent themes of loyalty, fierce ethnic pride, and a willingness to struggle against hostile forces in society. There are wry twists of humor and surprising turns of plot; a long-lost love is renewed; a long-hidden family secret is revealed.

Scent of Apples: A Collection of Stories 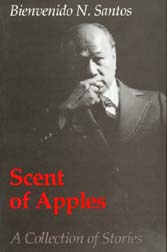 This collection of sixteen short stories brings the work of a distinguished Filipino writer to the attention of an American audience. Bienvenido N. Santos first came to the United States in 1941, and since then, he has lived intermittently here and in the Philippines, writing in English about his experiences. 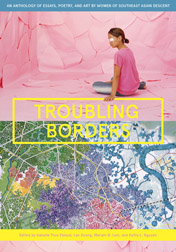 Troubling Borders: An Anthology of Art and Literature by Southeast Asian Women in the Diaspora
Edited by Isabelle Thuy Pelaud, Lan Duong, Mariam B. Lam, and Kathy L. Nguyen

The diverse voices featured here have been shaped by colonization, wars, globalization, and militarization. For some of these women on the margins of the margin, crafting and showing their work is a bold act in and of itself. Their provocative and accessible creations tell unique stories, provide a sharp contrast to familiar stereotypes—Southeast Asian women as exotic sex symbols, dragon ladies, prostitutes, and “bar girls”—and serve as entry points for broader discussions on questions of history, memory, and identity.