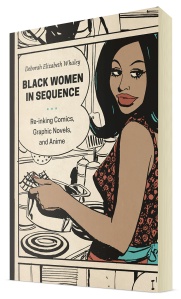 As we head into the 40th Black History Month (AKA African American History Month and #BlackFutureMonth), we feature a guest post from UW Press Senior Designer Thomas Eykemans on the creative process behind Black Women in Sequence: Re-inking Comics, Graphic Novels, and Anime by Deborah Elizabeth Whaley. The book won an award in the Scholarly Illustrated category of the 2016 AAUP Book, Jacket and Journal Show.

As the first detailed investigation of Black women’s participation in comic art, Black Women in Sequence examines the representation, production, and transnational circulation of women of African descent in the sequential art world. In this groundbreaking study, which includes interviews with artists and writers, Whaley suggests that the treatment of the Black female subject in sequential art says much about the place of people of African descent in national ideology in the United States and abroad. Below, Eykemans walks us through the collaborative design.

Comics are one of my favorite visual mediums, so it was a pleasant surprise to learn that I would have the opportunity to work on this book. With a diverse range of imagery to draw from and challenging themes to approach, I reached out to the author to help clarify the intention of her book and how I might best represent that in the cover design. Deborah identified the comic strip Friday Foster as the ideal source for a striking cover image. Friday Foster was the first black female comic strip character in a mainstream publication.

The following is excerpted from an email from the author about the specific panel chosen for the book cover:

I thought about the kitchen setting and the “gender trouble” or sexist connotation that some could attach to the image. Yet, in this case, it is an unusual image of a Black woman that depicts high glamour, and her expression and posturing is a wonderful contradictory mix of what I describe in the book as “monster beauty,” which constitutes hyper-femininity, assertiveness, and sexual control in familiar settings. In my book I discuss the image of the Black domestic in comic strips as a subversive iteration of the “pin-up,” such as in the Candy comic strip images by Jackie Ormes that I explore in the first chapter.

I think everything else going on in the scene—the look in her eyes, the posturing, the words in the speech bubble—subverts the setting. It is not as if it is an image that condones women’s place as in the kitchen, nor is it a “mammy” type image. As a feminist and an artist who wrote the book, I’d be highly surprised if anyone in the field—knowing me and having read the book—came away with that thought.

The larger reason for its use is that Friday Foster was the first mainstream Black comic strip character of any gender, and even by today’s standards of “corniness” it continues to garner praise for its un-stereotypical representation of a Black woman in visual culture. Friday Foster was single, a career woman, and glamorous. The creator was a white male cartoonist who did the strip with the intention of providing an image of Blackness not depicted in popular culture or comics at the time. I came across an article he did in the New Yorker in 1970 and he talks about this, and also his decision to use a Spanish artist who he felt would do the visual work justice without the type of “minstrel” or crude representation of Blackness previously seen in popular culture.

There were certainly some problems with the strip, which I footnote in the book. However, we know that the strip was so important that it was made into a comic book and later a movie starring Pam Grier. I really wanted to use her imagery because she was the first mainstream Black female comic strip character in a mainstream newspaper and one that was not a stereotype. I looked through many Friday Foster strips, and others could suffice, but this one really grabbed me for its subversive and contradictory posturing and characteristic. As an artist, I just love it: her posture, the look in her eyes, the vintage feel to it. In the end, even if someone came away with “wow, she is in the kitchen, how sexist (or potentially racist?)!”—wouldn’t that too be interesting as a counter-juxtaposition to the book?

In the book’s conclusion I talk about the “cover wars” generated when Marvel put out the graphic novel Marvel Divas, which was based on Sex and the City. Everyone complained that the cover was sexist and too sexy. What I write about is that the discourse of the cover overshadowed the actual content of the book and many were missing the point. I balance a discussion of paying attention to and critiquing sexist imagery while still thinking through more complex issues of representation and forgoing the idea that every sexual image of a woman is “sexist.”

The final design was a successful collaborative effort thanks to Deborah’s insightful observations and artistic eye. Only Friday Foster is colorized, while the background remains plain black and white. It was tempting to use a comic-style font for the title but it seemed more appropriate to apply more thoughtful typography considering the important nature of the material. 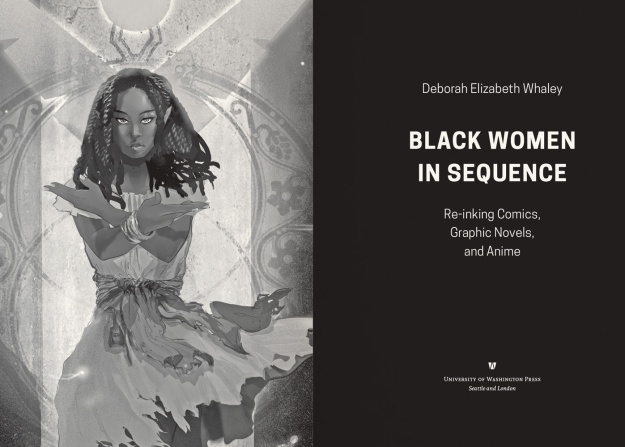