In today’s post, UW Press book designer Dustin Kilgore describes the process of designing the new cover for Carlos Bulosan’s memoir, America Is in the Heart: A Personal History. The book, first published in 1943, describes Bulosan’s boyhood in the Philippines, his voyage to America, and his years of hardship and despair as an itinerant laborer following the harvest trail in the rural West. As Marilyn C. Alquizola and Lane Ryo Hirabayashi point out in their new introduction, the book “still stands today as both an indictment of twentieth-century American imperialist designs overseas and a testament condemning a pre–World War II domestic regime of racialized class warfare.” Nevertheless, Bulosan maintained hope that America would provide new opportunities and he came to love it as his home. Here, Kilgore explains how he wrangled these complexities in designing the cover of the new 2014 edition of the book.

Prior to the 2014 reissue, the most recent edition of America Is in the Heart was published by the University of Washington Press in 1973 and featured a 1946 illustration by Frances O’Brien from the cover of the Saturday Review of Literature. When the design was reduced in size for the 1973 book cover, the shadows on Bulosan’s face appeared heavier than in the original illustration. This problem was exacerbated in subsequent reprintings, ultimately resulting in a heavily shaded, somewhat sinister-looking illustration of Bulosan. The determined look in Bulosan’s eyes in the original O’Brien illustration became almost glowering as the quality of the illustration was degraded over time.

The original Frances O’Brien portrait of Bulosan as it appeared on a 1946 cover of The Saturday Review of Literature (left) and the degraded, heavily shadowed illustration on the cover of the 1973 edition of “America Is in the Heart” (right).

For the new cover, we wanted a more upbeat tone that highlighted Bulosan’s unerring hope for America even in the face of hardship. While we were in the process of thinking about a new cover image, UW Press senior designer, Tom Eykemans, happened to spot this mural in Seattle’s International District. The mural had recently been installed by Urban ArtWorks and was based off of a photograph of Bulosan that showed more optimism and nuance than the illustration used for the book’s previous edition. 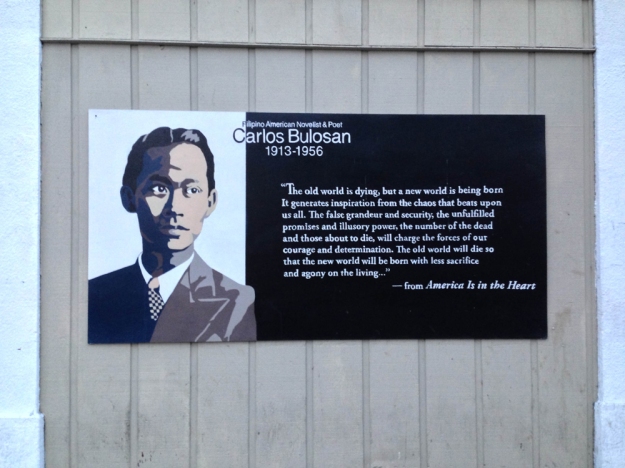 The Urban Artworks mural of Bulosan in Seattle’s International District. The quote that appears in the mural is pulled from “America Is in the Heart” and reads, “The old world is dying, but a new world is being born. It generates inspiration from the chaos that beats upon us all. The false grandeur and security, the unfulfilled promises and illusory power, the number of the dead and those about to die, will charge the forces of our courage and determination. The old world will die so that the new world will be born with less sacrifice and agony on the living …” —Carlos Buloson, from “America Is In the Heart

The more optimistic expression in this mural fit perfectly with the direction I was hoping to take the new cover design. The iconic image of Bulosan, modeled off the undated portrait at right, speaks to the duality of his life and work, as well as his legacy. At the time of his death he was largely forgotten as a writer. He was ostracized, yet hopeful in the face of many adversities; disenfranchised, yet prolific in channeling his discontent in creative and proactive ways.

I switched the image’s color palette to warmer tones, rather than staying with the cool color palette the mural uses. The cool tones work well for the place the mural is installed, but I was concerned it would make the book less inviting and unintentionally repeat the somewhat sinister effect of the shadows we saw in the reprints of the 1973 edition.

The collaborative nature of this cover is also in keeping with the spirit of Bulosan’s life and work. Urban ArtWorks’ mission to empower young people and restore communities through public art makes the use of the work all the more appropriate considering Bulosan’s efforts to promote social justice through his own art.

We owe a big thank you to everyone at Urban ArtWorks for letting us feature the mural on the cover. Thanks especially to Kathleen Warren and the artists who painted the mural: Brendan Lattin, Javar Lawrence, Emily Taibleson, Sarah Morse, Mia Folkins, Prezley Graza, Justin Dollarhide, Collin McBreen, Darris Rhoads, and Janet Hoffman. We also thank former UW Press graduate fellow, Marites Mendoza (now at the Wing Luke Museum), who put us in touch with Urban ArtWorks.

1 thought on “Behind the Covers: “America Is in the Heart””