Jacob Lawrence (1917-2000) is widely regarded as one of America’s most important and celebrated artists. Lawrence’s paintings, drawings, and murals depict both critical moments in history and poignant struggles of the black American experience—from the Civil War to the civil rights movement and beyond. Lawrence’s many awards include his 1983 election to the American Academy of Arts and Letters, a National Arts Award in 1992, and his confirmation as Commissioner of the National Council of the Arts in 1978 by the U.S. Senate. Lawrence accepted a tenured position at the University of Washington in 1971, retired as professor emeritus in 1986, and remains one of Seattle’s most beloved artists. 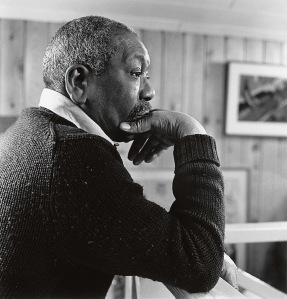 Jacob Lawrence in his Seattle studio, 1984. Photo by Mary Randlett.

In celebration of the 100th anniversary of his birth, the Seattle Art Museum will show all sixty panels of the epic series considered his masterwork together on the West Coast for the first time in decades. Jacob Lawrence: The Migration Series is on view from Saturday, January 21 through Sunday, April 23, 2017.

The University of Washington Press is proud to have published many books by and about Lawrence over the years and in conjunction with key exhibitions of his work at museums throughout the country.

Learn more about Jacob Lawrence: The Migration Series at the Seattle Art Museum site, which also provides links to online interactive experiences created by the two museums that jointly own the series:

Additional reading from UW Press by and about Jacob Lawrence:

Aesop’s Fables combines 23 timeless morality tales with striking black ink drawings by the revered artist. Published originally in 1970, the book was out of print for two decades. The new edition, completely redesigned and typeset, adds five illustrations Lawrence prepared for the original edition but which were not included in it.

This major book is the most comprehensive survey ever made of Lawrence’s work and traces his development as an artist as well as places his work within the tradition of American modernism. The chronological overview of his career is enhanced by over 150 illustrations of his work, 85 in color, and a generous selection of photos that place him in his studio, in the art world at large, and among his friends and colleagues.

Over the Line: The Art and Life of Jacob Lawrence
Edited by Peter T. Nesbett and Michelle DuBois

The first multi-author, in-depth probe of the artist’s entire career: the nature of his work, his education, the critical climate in which he worked, and his use of materials and techniques. It reproduces, in full color, more than 200 works, most of which had not been published in color, or at all, in other books on the artist.
Also available:

This new edition of Jacob Lawrence: Thirty Years of Prints (1963-1993) includes 19 new prints produced by Lawrence since 1993, including 7 from the Toussaint L’Ouverture series. The book includes an essay by Patricial Hills. In his graphic work, Lawrence presents a vision of a common struggle toward unity and equality, a universal struggle seated in the depths of the human consciousness.