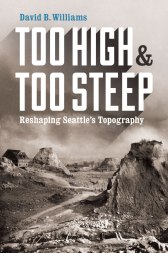 Too High and Too Steep by David B. Williams is reviewed by Michael Upchurch in the Seattle Times:

“Williams does a marvelous job of evoking the cityscape that used to be. He clues us in to the spirit of civic ambition that drove Seattle’s geographical transformations. He methodically chronicles the stages by which its regrade, canal and landfill projects were accomplished. And he’s meticulous about placing his readers on present-day street corners where they can, with some sleight of mind, glimpse the hills, lake shores and tide flats that vanished.” 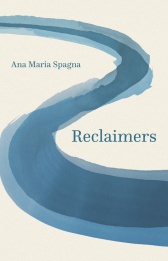 Reclaimers by Ana Maria Spagna is reviewed by Irene Wanner in the Seattle Times:

“Spagna’s enthusiasm for their dedication and causes is irresistible. Such struggles are the real deal, after all, and what reader wouldn’t cheer on these tenacious underdogs trying to remedy past damage? We’re blessed with opportunities to make a difference, the writing shows…The lessons of her journeys, those readers can glean from these pages, are ‘Do what you can. Hope without hope. Expect the unexpected.'”

Cindy Ott, author of Pumpkin, talks to the Associated Press about “pumpkin spice.” Tune in to her interview with Evan Kleiman on KCRW’s “Good Food” on Saturday, October 3rd at 11 a.m. PCT.

From Igor Stravinsky’s presence as guest conductor at the World’s Fair in 1962, to Speight Jenkins’s masterly production of Wagner’s Ring cycle, to the work of benefactors such as Jack and Becky Benaroya, Seattle is deservingly well known as a city of the musical arts.

In Classical Seattle, Melinda Bargreen documents the lives of prominent figures in the local classical music world. Informed by Bargreen’s experience as a music critic and drawing on interviews she conducted over several decades, the 35 biographical profiles presented here illuminate the conductors, performing artists, composers, arts organizers, and arts leaders who have shaped Seattle’s classical music community and made world-class performances possible. Among the individuals featured are University of Washington virtuosi, Seattle Symphony maestros and musicians, and Seattle Opera directors.

This groundbreaking collection of personal narratives and academic essays focuses on the daily lives and experiences, as well as the broader social contexts, for mixed status families–families that include both citizens and noncitizens–in the United States. Immigration reform remains one of the most contentious issues in the United States today and for these families it is more than a political issue: it’s a deeply personal one. Undocumented family members and legal residents lack the rights and benefits of their family members who are US citizens, while family members and legal residents sometimes have their rights compromised by punitive immigration policies based on a strict “citizen/noncitizen” dichotomy.

The artists in the Paul G. Allen Family Collection represent a who’s who of masters of the landscape tradition: Jan Brueghel, Canaletto, Van Gogh, Max Ernst, David Hockney, and many more.

This book chronicles the evolution of landscape painting over four hundred years and features thirty-nine paintings, each accompanied by detailed essays that comprise a full discussion of the formal intellectual development of the landscape form.

David B. Williams, Too High and Too Steep, Seattle Public Library with Elliott Bay Book Company, October 10 at 2:00 p.m.