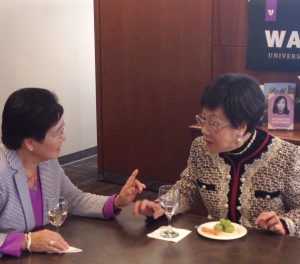 The staff of the University of Washington Press was honored to host former Taiwanese Vice President Annette Lu and her coauthor Ashley Esarey for an author reception prior to their book talk at Town Hall Seattle. Vice President Lu and was in Seattle on the last stop of her U.S. book tour for her new memoir, My Fight for a New Taiwan: One Woman’s Journey from Prison to Power. See additional photos from her visit here.

Congratulations to Peter Sears, who has just been named the next Poet Laureate of Oregon. Sears is the author of Small Talk: Selected Poems, which we distribute for Lynx House Press. We’re delighted to have the opportunity to work with such an acclaimed poet!

The Bellingham Herald praised How to Read the American West: A Field Guide by William Wyckoff for encouraging readers “to see with fresh eyes even as we’re barreling down the interstate—to remember to think about the role of time in shaping a landscape, as well as the role of water. He asks us to think about who controls the landscape, and how these places have been shaped by different human interventions. He suggests that we can learn how communities think about themselves by examining their publicly ordained places, from civic centers to national parks to those giant letters emblazoned on the hillside above town….a marvelous springtime tonic for wanderlust and a wonderful invitation to see our surroundings in a new light.” Read the full review here.

Verse Going Viral: China’s New Media Scenes
By Heather Inwood
Verse Going Viral examines what happens when poetry, a central pillar of traditional Chinese culture, encounters an era of digital media and unabashed consumerism in the early twenty-first century. Through a cultural studies approach that treats poetry as a social rather than a purely textual form, Inwood considers how meaning is created and contested both within China’s media-savvy poetry scenes and by members of the public, who treat poetry with a combination of reverence and ridicule.

Bodies in Balance: The Art of Tibetan Medicine
Edited by Theresia Hofer

Generously illustrated with more than 200 images, Bodies in Balance includes essays on contemporary practice, pharmacology, astrology, history, foundational treatises, and the Medicine Buddha. The volume brings to life the theory and practice of this constantly evolving, ancient healing art, which is becoming increasingly sought after world-wide.

Gold and the Incas: Lost Worlds of Peru
Edited by Christine Dixon

Gold and the Incas reveals the splendor of ancient pre-Hispanic cultures of Peru featuring art made of gold, silver, turquoise, shell, stone, textile, and ceramic. More than 200 objects are covered, showing the aesthetic depth, drama, and beauty of the famous Incan empire and its predecessors. As well as deities, lively depictions of animals, birds, and fish decorate the works. Treasures from the Museo Nacional de Arqueologia, Antropologia e Historia del Peru, Museo Arqueologico Rafael Larco Herrera, Fundacion Museo Amano, Museo Oro del Peru and the National Gallery of Australia are discussed and illustrated in color.

Finding Their Voice: Northeastern Villagers and the Thai State
By Charles F. Keyes

This book traces the evolution of the rural, Lao-speaking people of northeastern Thailand, now over a third of the nation’s population, from a traditional peasantry into “cosmopolitan” villagers who are actively shaping Thai politics. The electoral successes of the Thai Rak Thai/Pheu Thai Party in the early twenty-first century and the strong support given to the Red-Shirt movement appear to have finally given the cosmopolitan villagers of northeastern Thailand a continuing voice in the nation’s political process.