I am thrilled to see the publication of Sculpture on a Grand Scale: Jack Christiansen’s Thin Shell Modernism.  Nearly ten years in the making, this book project has taken me to countless locations across the state to visit projects, and to conferences across the world to share Jack Christiansen’s legacy.  But the real significance of this book resides right here in the Pacific Northwest.

Christiansen was a classic Northwest individual – loving all things connected to nature (hiking, mountaineering, boating), family, and building innovation.  The balance he attained between professional and personal lives was remarkable, and the impact he left on the built environment of Seattle was profound.  Anyone interested in the recent history of the Pacific Northwest, and the drivers of change, will find something exciting in this text.

Sculpture on a Grand Scale shows how Christiansen was intrinsically linked to several essential eras of Northwest life and the buildings he helped design still surround those of us who live here.  Christiansen designed for the post-war population boom – schools, churches and residences.  He designed for Boeing, becoming part of the constant drive for invention and improvement.  He designed for the paradigm-shifting 1962 Seattle World’s Fair.  Christiansen’s impact continued into the 1970s, playing a key role in realizing the Seattle Kingdome and ushering in a new era of Seattle sports.

As its image now graces the cover of the book, the Kingdome is certainly Christiansen’s most impactful work.  Most people who lived in Seattle prior to the 2000s have personal memories of the massive concrete stadium.  Some memories are of wonderful concerts, football games and the 1995 Mariners playoff run.  Those who grew up during that time recall the spacious interior filled with fans from all over the region.  Other memories are less pleasant, recalling the cold, grey exterior and the Kingdome’s imposing form over the surrounding neighborhood.  Debate over the Kingdome’s legacy still goes on in the comments section of any recent news article.

Christiansen’s life – and his work leading up to the Kingdome – offers an overlooked perspective.  The Kingdome was the culmination of many years of work in thin shell concrete – where geometry and structure were intertwined in the creation of space.  When King County needed a multi-use, cost- efficient structure, Christiansen dedicated his work to making a stadium possible and saving taxpayer dollars.  His design innovations for the Kingdome were not flashy or frivolous, they were responsible and austere.  In the high-cost, high-inflation times of the early 1970s, this was innovation that was needed. 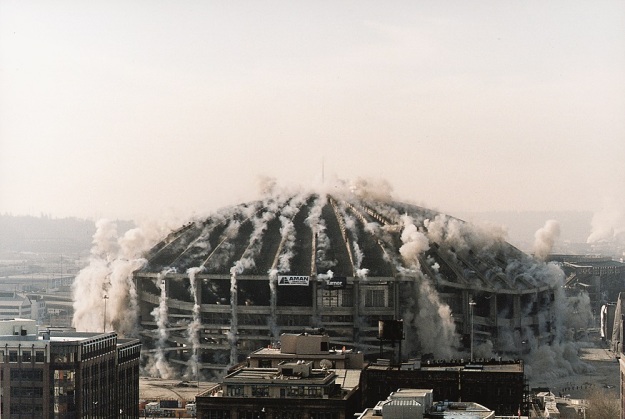 The demolition of the Kingdome offers another chance for reflection on a chapter of Seattle life.  By the 2000s, the grim economic fortunes were long gone – replaced by a booming technology industry and the Kingdome had become a relic of the earlier time.  Christiansen’s idea that buildings should be designed to last 1000 years was no match for the rising economic ambitions of professional sports.

As things in Seattle continue to change, Christiansen’s work is finding new resonances.  The book not only describes his late work – like the Bainbridge Island Grandstand – but also the preservation efforts underway to ensure his extant work is celebrated as heritage, as a part of Seattle’s past.  New efforts in research are re-visiting some of Christiansen’s design methods, as an interest in material efficiency.

The accompanying exhibit in Gould Hall Gallery (open until December 6th) further brings Christiansen’s work to light.  The exhibit shows models, original design documents, and Christiansen’s writings.  With an entire room dedicated to the Kingdome, the exhibit includes early design strategies, Kingdome newsletters, a video of the Kingdome construction, memorabilia and a scale model of the structure. 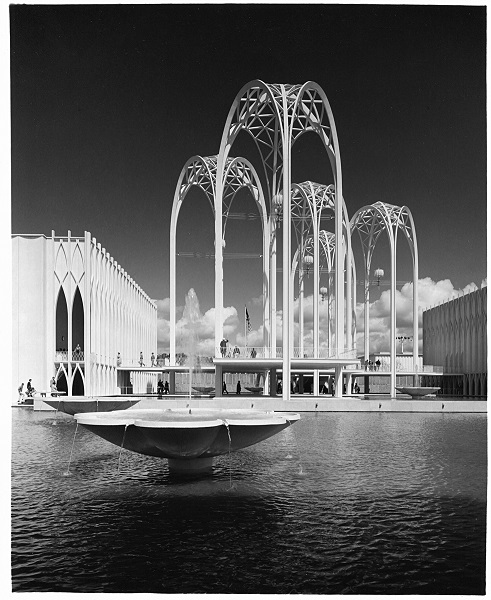 The book is a celebration of architecture, engineering and design.  Readers may recognize the rounded roof of the Greenlake Pool, or the soaring arches of the Pacific Science Center. The work may inspire exploration into more of Christiansen’s work – like the Bridge over the north fork of the Snoqualmie River.  I hope readers will be left with a better understanding of not just Christiansen’s work, but an expanded perspective of the built environment of the Pacific Northwest.

Tyler S. Sprague is assistant professor in the Department of Architecture at the University of Washington and serves on the boards of the Construction History Society of America and the Western Washington chapter of Docomomo. His new book Sculpture on a Grand Scale was made possible by the generous support of the Michael J. Repass Fund for Northwest Writers.

To hear more from Tyler S. Sprague, join us at the University Bookstore on Thursday, October 10th at 6 p.m. for a special event and book signing!