One beautiful aspect about Seattle is that there are truly endless ways to explore the city. There are many museums, famous monuments, tours, and restaurants to visit. However, if you are looking for something unique to do, Art in Seattle’s Public Spaces by James Rupp offers tours of public art for each of Seattle’s many popular areas. He offers a unique way for you to learn some of Seattle’s history through its artworks. Katie Felton and I, marketing assistants of UW Press, were lucky enough to tour the waterfront for its public spaces, and we discovered some striking art.

In the beginning of our tour, we visited the memorial of Ivar Hagland. The sculpture shows Hagland in a captain’s hat and seamen’s jacket feeding seagulls french fries, which was one of his favorite pastimes. He’s a perfect companion to sit next to as you watch people pass by or enjoy a nice lunch of fish and chips from Ivar’s Fish Bar. Ivar Hagland (1905–1985) was known to be a restaurant owner and entrepreneur who advocated for the city and its people. He was very well liked by the Seattle community. After his death in 1985, many of his friends pooled together the funds to build a statue in his name because he was so beloved by them. Since 1912, this is the first memorial of a Seattle citizen placed in a public space. Richard Beyer sculpted the memorial out of aluminum and bronze and helped leave Ivar Hagland’s legacy behind.

Waterfront Fountain will not fail to leave an impression of awe on the sightseer. Made from a combination of cubic structures, with water cascading off the tall bronze artwork, it is a piece to appreciate. Waterfront Fountain is the last fountain that James Fitzgerald made for Seattle. He designed it with his wife, painter Margaret Tomkins, in October 1973. Sculptor Terry Copple and welder Art Sjodin collaborated with the couple on the piece, due to their past work with Fitzgerald. This work was given to Seattle in memory of Edward M. and Margaret J. Harrington. The Harringtons came to Seattle in 1921 and, like Ivar Hagland, had an undying love and devotion for the city. 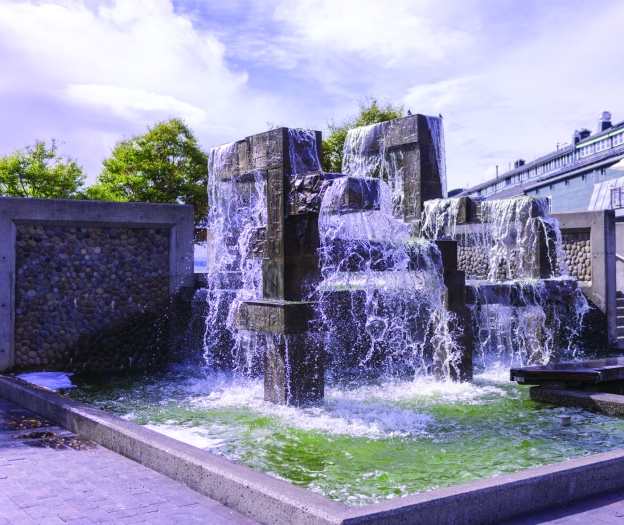 As Katie and I approached one of our last artworks, we were delighted to see a colorful mosaic at the bottom of the staircase at the Bell Harbor International Conference Center. Called Danza del Cerchio, Seattle artist Ann Gardner created this piece using glass mosaics and ancient Byzantine techniques. The mural is 48 feet long, with bright, multicolored disks in every color of the rainbow. Ann Gardener first drafted this design on paper, then transferred it to the mosaic form. This piece put us both in a better mood by the time we left it; it is a piece that can brighten up anybody’s day.

Many people often think to go to the waterfront because there are a number of fun things to do there. However, not many notice the art that lives within the area. Katie and I were both grateful to go on this tour for that very reason. Katie has lived in Seattle for several years, and I have lived here my whole life, but neither of us had noticed this hidden world of art. It was synonymous to going on a treasure hunt—no doubt! We realized that many precious pieces of the past go unnoticed and unappreciated. Every day, people pass by these artworks—but how many recognize the piece, appreciate its presence, and know why it’s there? Most likely, not many. What James Rupp has compiled for us is a gift to explore the greater depths and personalities that reside and resided in Seattle. It gives us a way to see how artists expressed themselves through their artwork, or how and why individuals were remembered. It’s more than just seeing art, but a glimpse into why things are the way they are.

The tours offered by James Rupp in Art in Seattle’s Public Spaces present something unique to both the out-of-town tourist and lifetime Seattleite. If you are a tourist, you can explore the city’s art history in depth by seeing how interwoven the art is within the streets of Seattle. As an old-time Seattleite, art lovers can appreciate the hidden gems that cover the entire city in open spaces and hidden crevices. The waterfront tour takes about an hour to complete, with seven destinations along the many piers of the waterfront. However, there are many tours that you can take that span from seven to more than thirty public art pieces. Depending on your curiosity and adventure levels, you can break up the day with a short art tour while sightseeing the rest of the city, or devote an entire afternoon to exploring the art in Seattle’s public spaces.

Perfect for art and architecture lovers, as well as visitors and newcomers to the city of Seattle, Art in Seattle’s Public Spaces by James Rupp showcases the wealth of urban art to be freely enjoyed by all.

Good weather and visitors inspire many to explore downtown Seattle, but after Pike Place Market, Pioneer Square, and the Olympic Sculpture Park, many are at a loss about other destinations. The collection of art in Seattle’s public spaces provides many opportunities to discover hidden art treasures in the city—many tucked away in unfamiliar locations and others obvious but unnoticed by passersby. The South Lake Union (SLU) neighborhood is one of my favorite sites to tour because it has over twenty artworks readily available to see during a two-hour walk. Most of them are contemporary creations and the designs of many were influenced by the neighborhood itself.

Nautical history is a theme of two works in South Lake Union Park. An upside down, 20-foot-long sailboat hull is the principal element of Blanche, a sculpture at the park’s northern end. Artist Peter Richards created it after learning about the long history of boating and boat building on Lake Union. One of the best-known builders was Blanchard Boat Company, which built the hull you see. The exterior is clad in stainless steel, a nod to the more technological industries in today’s SLU. You can rent the same model sailboat at the nearby Center for Wooden Boats.

Near Blanche is the Museum of History & Industry (MOHAI) which is well worth a visit. Hanging from the ceiling down to its main floor is John Grade’s 60-foot tall, 11,000 pound sculpture constructed from wood planking from the three-masted schooner Wawona. Grade named his work after that dismantled sailing vessel. MOHAI has informative signage that tells about both the ship and the many interesting aspects of Grade’s design. It moves and you can walk into it! A must-see.

The designs of two sculptures by Seattle’s Lead Pencil Studio arose from research about what the neighborhood looked like in the last century. Re-Stack, at Ninth Avenue and Thomas Street, has arches one would have seen on old buildings and its stacked cubes refer both to pallets in the many warehouses that once existed throughout SLU, as well as stacked boxes in today’s Amazon facilities. This sculpture is made of a stainless steel wire mesh that seems to create a ghostly image of things past. Lead Pencil Studio used the same steel mesh to create the form of a toll booth in the plaza off of Fairview Avenue North between Thomas and Harrison streets. This was inspired by photos of parking lots that were once common in the area. The sculpture, titled Troy Block, refers to the Troy Laundry building that once stood on this site, remnants of which remain on its east side.

Walk down the alley off of Republican Street between Yale and Pontius avenues and you can see one of the many other brick laundry facilities that inhabited SLU throughout the 20th century. On the other side of that alley is Laundry Strike, a vertical collection of wicker hampers cast in bronze, with “1917” woven into one side. Wicker hampers were used by laundry workers (all women) and artist Whiting Tennis used these images to commemorate the 1917 Seattle laundry strike, which resulted in those workers achieving an eight-hour workday and pay of ten dollars a week—one dollar more than minimum wage at that time!

SLU also has a collection of art that refers to the history being made today by high tech companies. Biotech research is the subject of Labyrinth, laminated glass panels that stand outside of the Center for Disease Research at 307 Westlake Avenue North. In this piece, artist Linda Beaumont incorporated chronographic representations of the genetic sequence of a lethal parasite that is being studied within the building. Dan Corson’s Nebulous, at 400 Ninth Avenue, refers to Seattle’s role in computer innovation and the fact that both the environmental and technological climates are changing. Note that the glass discs of his two cloud-like forms (which also refer to Seattle’s cloudy weather) electronically change levels of opacity and pulsate at varying rhythms.

With the complex grey column at Mercer Street and Boren Avenue, artist Ellen Sollod achieved her goal of creating a technology-oriented work for this multifaceted neighborhood of biotech and technical research companies. It’s called Origami Tessellation 324.3.4 (Fractured). Sollod also created other small works along Mercer, including a hatch cover in the sidewalk at the corner of Fairview Avenue and Mercer Street that features a spider and its web—Sollod’s reference to the worldwide web.

As you tour these and other artworks in SLU, keep in mind that there are over 300 other artworks readily available for viewing in Seattle’s public spaces. You may love some and dislike others, but you’ll never know unless you walk about and look.

James M. Rupp is a Seattle native, long-time lawyer, and local historian who has been collecting information about art in Seattle’s public places for over forty years. Art in Seattle’s Public Spaces is his second book on the subject and was made possible by the generous support of the Michael J. Repass Fund for Northwest Writers.