I love National Bike Month. It’s spring, and all is right in the world.  Matching the spirit of the season, the many local events of bike month are exercises in light-hearted and cheerful consciousness-raising. They encourage people to ride their bicycles in ideal conditions.

But is there more to it than just a good time? In my research for Bike Battles: A History of Sharing the American Road, I chose to re-examine what some consider a toy and a plaything to find the more complex stories of urban, environmental, and policy history hidden below.  Can we do the same with National Bike Month?

Like many of our national holidays, National Bike Month is an invented tradition, created and modified for changing publicity, marketing, and educational purposes.  It’s part of a pattern of similar events, like Bike to Work Week and Bike to School Day. Some have come and gone, like the 1976 Bikecenntennial tour; others are brand new, like the National Bike Challenge organized by industry-supported People for Bikes.

While there was no national advocacy event in the first bike boom of the 1890s, activists and advertisers still knew that spring was when people wanted to ride. Ads in 1897 declared May “the best bicycle month of the year.” Lest Crescent Bicycles lose year-round sales, the advertisers reminded readers: “Every Month a Crescent Month.” 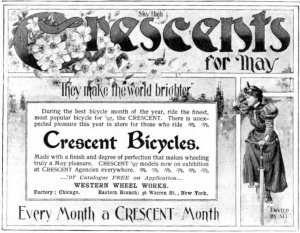 In the twentieth century, the postwar history of National Bike Month begins with the theme of safety. Local and state organizers promoted spring “Bicycle Safety Weeks” in the decades after WWII. Many such events were organized in April by elementary schools, police departments, and local chapters of the Optimist Club, a civic fraternal organization. Their intended audience was almost exclusively children.

The Bicycle Institute of America, the lobbying and promotional arm of American manufacturers, got involved in 1956. They designated the entire month of May as “American Bicycle Month,” and raised the event’s profile considerably. But the dominant theme was still safety, and the audience was still largely children: a Wilmington, North Carolina newspaper story citing the BIA assured concerned parents that “bicycling has the best vehicle safety record in the United States.” 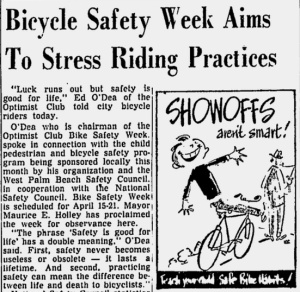 With the celebrated cardiologist Dr. Paul Dudley White as spokesperson by the early 1960s, the BIA began to include themes of infrastructure and adult health: “This day marks the beginning of American Bicycle Month, dedicated to expanding bicycle riding facilities in our Nation . . . that is, bicycle paths, trails, tracks, and better places to ride,” White said in an address read into the Congressional record.  “Let me say . . . that six decades ago when I was a boy, we cycled for convenience, economy, and fun, but not necessarily for fitness.”

By the 1970s and early ‘80s, the event was now National Bike Month, and the rhetoric had shifted to environmental and transportation goals.  For example, North Carolina’s Governor James Hunt “emphasized the bicycle’s role as a ‘valuable tool in saving energy resources and money’” in a 1981 declaration.[4]  The prime mover also changed from the industry-funded BIA to the newly resurgent (but still somewhat disorganized) membership organization the League of American Wheelmen.  Today, the renamed League of American Bicyclists promotes “the many reasons we ride,” and the language is explicitly inclusive: “Whether you bike to work or school; ride to save money or time . . . preserve your health or the environment; or simply to explore your community.”

2015 poster from the League of American Bicyclists.

Even this brief history shows significant change. In the 1950s, safety week events taught traffic rules to children, making it seem that adult cycling for recreation or transportation might be an aberration. New concerns about adult health and environmentalism were added in the ‘60s and ‘70s, but the BIA still continued the focus on children, the major market for American manufacturers. Today the League tries to build advocacy consensus by appealing to all riders: recreational or practical, child or adult.

These events changed according to the politics of the promoters and the concerns of their era. Really only one thing stayed the same: the season.  As the New York Times pointed out in 1957: “These are the days the bicyclist waits for, the warm days but not yet hot days, when clear skies and the burgeoning greenery welcomes people of all ages into the outdoors again.” Which reminds me, I have to go for a ride.

James Longhurst is associate professor of history at the University of Wisconsin-La Crosse and author of Citizen Environmentalists. His newest book, Bike Battles, is receiving national attention.

You can see Dr. Longhurst in our area next month: