For National Poetry Month, we are pleased to share a conversation with poet David Biespiel, author of Republic Cafe.

It’s Monday, 10am. Would you tell us your motto for writing poems?

My motto would be, writing poems is impossible. That’s my motto. It’s impossible for me to do anything else, first of all, but to write poems. But, to write a poem? What is that? What is a poem? Every effort to write a poem is as much a soaring success as it is a terrible flub. It’s impossible to write in the direction I want to write, because as soon as I get close to that point on the horizon I’ve been aiming toward, what I’ve been trying to write appears different to me. Everything I’ve been doing, therefore, is wrong. A failure. In a catalogue essay from the 1960s of a MOMA exhibition of Alberto Giacometti’s work, there’s this opening paragraph in Peter Selz’s introduction:

‘To render what the eye sees is impossible,’ Giacometti repeated one evening while we were seated at dinner at the inn at Stampa. He explained that he could really not see me as I sat next to him—I was a conglomeration of vague and disconnected details—but that each member of the family sitting across the room was clearly visible, though diminutive, thin, surrounded by enormous slices of space. Everyone before him in the whole history of art, he continued, had always represented the figure as it is; his task now was to break down tradition and come to grips with the optical phenomenon of reality. What is the relationship of the figure to the enveloping space, of man to the void, even of being to nothingness?

That about covers it—for writing. It’s impossible. And, that’s exactly what makes it so freeing, so enticing.

What led you to become a writer? And, specifically a poet?

I recently published a book on this subject, The Education of a Young Poet. I think I became a writer because I liked messing around with words, with sentences. I liked the feel of moving a verb from the front of a sentence to the end. I liked feeling curious about whether I should end a sentence on a noun, or start with a noun. I liked seeing the figure of ideas and images form, from one word to the next, one phrase and one clause to the next, one sentence and one paragraph to the next. That’s what I liked and what I still like at the most tactile/DNA level of writing. Writing a poem is all of that on steroids. Now, with a poem, too, you have lines to enhance even more new relationships between adjective and noun, for instance. It’s mind-blowing.

As for why I became a poet? Writing poems, for me—because I write poems and nonfiction—I find that poetry offers greater velocity than prose and also poetry dwells more deeply in metaphor. Speed plus associative feeling. That’s two things that draw me to write poems. Underneath all that is an interest in asking questions that, perhaps, poetry can reflect upon. Writing Republic Cafe I was interested in the importance of forgetting, as opposed to the more traditional interest in the importance of remembering. So I was writing the poem—the long poem that’s the centerpiece of the book—to reflect upon that question. And yet, that’s the paradox. The close I got to dramatizing what I was forgotten, I began to see it, or remember  it, differently. So the book is trying to figure out what to make of that enigma.

Did you write the book in Portland?

Mostly, yes. In late 2012, during the production period for Charming Gardeners, which UW Press published in 2014, I began taking notes and studying the patterns of Alain Resnais’ Hiroshima mon amour in Portland. Then, in the fall of 2014, I went to West Texas and wrote for a month without interruption. That’s where I drafted the book. I worked on it for several years after that, and then, in late 2017, I put the book through a big revision after Linda Bierds read it. I did that revision in my house here in Portland over several weeks.

Many writers begin their career with teachers and models. Republic Cafe is your sixth book of poems since 1996. Did you have a model when you first started to write? Do you now?

When I first started to write, I was mostly alone. Not alone in the world—well, not entirely alone in the world, I mean—but alone with my books, with paper and pen. No teachers. I had no guidance. Later I studied with several wonderful poets. At the University of Maryland I studied with Stanley Plumly, Michael Collier, and Phillis Levin. At Stanford, when I was a Stegner fellow, I studied with W.S. Di Piero and Ken Fields. Because Stan Plumly introduced my first book, I suppose I’m most identified with him, and I’m extremely grateful to have studied with him. Truth be told I still learn things from him. From him personally—we’ve remained close for thirty years. And especially through his poems, which are remarkable for their warmth and tenderness. Before those teachers came along, and ever since, I would say Walt Whitman has been a model for me. I don’t mean the man so much—not to dismiss the man, that is, but I mean the writing. His engagement as a poet with language and life. The nexus of self and society that is the hallmark of his poetry. I’ve learned from Whitman that while images never become out-of-fashion or obsolete, blow-hardedness does. Commentaries do. Explaining or psychoanalyzing kills invention. Kills metaphor. Kills freshness. What’s so great about Whitman is he still feels contemporary. It’s the 200th anniversary of his birth this year, and he still feels in touch with our own time. Whitman doesn’t try to explain his motivations. Instead he conveys a consciousness. That’s the thing I’ve most tried to learn from Whitman. To write a poem is to invent a consciousness. But, of course, it’s impossible. 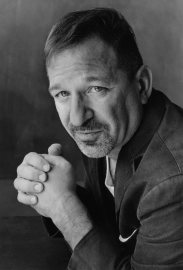 David Biespiel is a poet, critic, memoirist, and contributing to writer to American Poetry Review, New Republic, the New York Times, Poetry, Politico, The Rumpus, and Slate. He is poet-in-residence at Oregon State University, faculty member in the Rainier Writers Workshop, and president of the Attic Institute of Arts and Letters. He has received NEA and Lannan fellowships and was a finalist for the National Book Critics Circle Balakian Award. He has previously published The Education of a Young Poet, Wild Civility, The Book of Men and Women, and Charming Gardeners. You can buy his most recent collection, Republic Cafe by clicking here.