Stop by booth #524 if you are attending the meeting to see our full range of titles and to meet Editor in Chief Larin McLaughlin and Senior Acquisitions Editor Ranjit Arab. Use the #OAH2016 hashtag to follow along with the conference on social media.

We feature a few of our new and forthcoming titles, including several books publishing soon in our Indigenous Confluences series, here:

Forthcoming from our Indigenous Confluences series:

Using oral histories of Concow, Pomo, and Paiute workers, taken as part of a New Deal federal works project, this innovative book reveals how Native peoples have experienced and interpreted the history of the land we now call California. The result both challenges the “California story” and enriches it with new voices and important points of view, serving as a model for understanding Native historical perspectives in other regions.

For the first time, historian Kevin Whalen reveals the challenges of Native people from around the American Southwest who participated in labor “outing programs” at Sherman Institute, a federal Indian boarding school in Riverside, California. Despite cruel working conditions, young Native men and women used the outing program to their advantage whenever they could, forming urban indigenous communities and sharing money and knowledge gained in the city with those back home.

“The World of a Tiny Insect,” by Zhang Daye, translated by Xiaofei Tian

UW Press remembers Leroy (Lee) Soper, longtime member of the advisory board, who passed away on Tuesday, February 2, on the eve of his ninety-second birthday.

The four presses involved in the Mellon University Press Diversity Fellowship Program are now all actively recruiting for positions (see joint announcement). If you know of excellent candidates, please send them our way (applications due March 15)! Read a piece by UW Press editor in chief and Principal Investigator Larin McLaughlin at the UW Press blog and an interview with the MIT Press editorial director Gita Manaktala at the MIT Press blog.

The Association for Asian Studies has announced the winners of this year’s AAS book prizes. Xiaofei Tian is winner of the Hanan Translation Prize for World of a Tiny Insect. Author Wai-yee Li (one of the translators of Zuo Tradition / Zuozhuan and a coauthor of The Letter to Ren An) has won the Levenson Prize (Pre-1900 China) for her latest monograph (published by Harvard Asia Center). Congratulations to our authors and all involved!

P. Dee Boersma, author of Penguins, is a finalist for the prestigious Indianapolis Prize for conservation, sponsored by the Indianapolis Zoological Society (UW Today; Daily). Boersma and the five other finalists have been awarded $10,000 each and the winner will receive $250,000 and a medal. Listen to a recent interview with Boersma about iGalapagos on KUOW’s “The Record,” as well as in National Geographic and Smithsonian.com.

Black Women in Sequence author Deborah Elizabeth Whaley has Q&As at Blavity (picked up at the A.V. Club) and Little Village, and speaks with Comic Culture.
END_OF_DOCUMENT_TOKEN_TO_BE_REPLACED 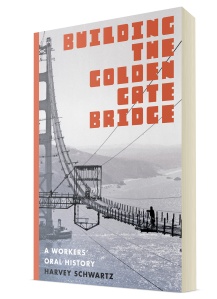 On January 5, 1933, workers began construction on the Golden Gate Bridge. Moving beyond the familiar accounts of politics and the achievements of celebrity engineers and designers, Building the Golden Gate Bridge by Harvey Schwartz is the first book to primarily feature the voices of the workers themselves. This is the story of survivors who vividly recall the hardships, hazards, and victories of constructing the landmark span during the Great Depression. In this guest post, UW Press Senior Designer Thomas Eykemans walks us through his creative process in designing the book’s cover.

In considering ways to find a unique approach to the design of a book about an overly familiar subject that has already been portrayed in countless photographs and films, I came across a pair of commemorative plaques that had been attached to the bridge when it was completed in 1937. They featured spectacular Art Deco typography, iconic of that era, which proved to be an irresistible starting point for the cover design.