Wilderburbs: Communities on Nature’s Edge is the environmental history of a housing phenomenon that places human developments in close proximity to wild places: on the edges of forests, deserts, and mountain slopes of the American West. Author Lincoln Bramwell, chief historian for the USDA Forest Service, spoke with us recently about what drove his interest in this topic and some of the major challenges that can accompany life in wilderburbs.

Q: Are wilderburbs and the sort of human/nature encounters they introduce a new phenomenon?

Lincoln Bramwell: Wilderburbs are in no way a new phenomenon. People with means around the world have maintained country estates outside of the crowded metropolis for millennia. Wealthy Americans began imitating English country estates following the Revolution when cities like Philadelphia and Boston grew in population and density. While these spaces were definitely out of reach for all except the upper class, by the nineteenth century rail lines allowed the middle class to live in larger single occupant homes away from the city. The automobile  further expanded how far Americans could live outside of town and maintain a job in the city, but the romantic suburb of the wealthy remained unattainable as the homes and development outside cities morphed into suburban sprawl.

Only in the mid- to late twentieth century did you see a confluence of factors that allowed the middle class to find their version of the romantic suburb in greater numbers. After the development of all-weather highways throughout the country, the affordability of all-wheel drive vehicles, the information and communication revolution that freed people and capital from the city center, and the availability of forested lands for sale and development did you start to see large numbers of Americans move beyond the suburban fringe and into wilderburbs. The trend really began to boom the last two decades of the twentieth century, but the desire to live in the woods but close enough to enjoy the amenities of the city is as old as our nation.

Q: How did you experiences as a wildland firefighter inspire and influence your research on wilderburbs?

LB: This project was born on a fireline. All throughout undergrad and graduate school, I spent summers fighting fires for the Forest Service. The work took me all over the West, from the uninhabited backcountry to the outskirts of major cities. Over time, I noticed more and more houses spring up in the woods like mushrooms after a spring rain. And these were not just solitary cabins, entire subdivisions tucked into the trees using every conceivable type of vegetation as screening between homes.

The presence of these homes started to change my job as a firefighter. As more people and homes with greater monetary value moved into the woods, the expectation for firefighters to control wildfires increased. The expectations translated into pressure to push fire crews beyond their capacity and outside of safety guidelines; loss of life was the inevitable result. With these changes taking place, I started asking questions about the appearance of housing developments on the forest edge. These questions sparked an inquiry that lasted years and culminated with this book.

Q: What are some of the unexpected challenges that wilderburb residents encounter? 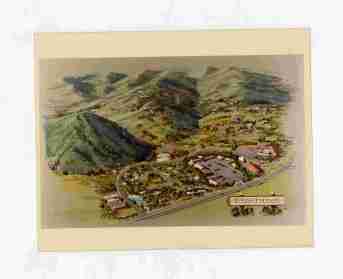 An artist’s conceptual drawing for the Pinebrook development outside Park City, Utah.

LB: There are many challenges that homeowners encounter once they leave the familiarity of the suburbs and move into the forest’s edge. First, land use regulations are very different in unincorporated areas of Western counties. In the book I give the examples of residents in Colorado that became frustrated when their closest neighbor turned his one-acre lot into a showcase for his wrecked car collection and of the shock of homeowners outside Park City, Utah who learned their development’s water system was not regulated by the state and could contain any number of contaminants.

In wilderburbs, residents normally accustomed to living in metropolitan areas additionally faced three primary types of environmental challenges: threats from wildfire, water scarcity, and encounters with wild animals. In my interactions with homeowners, I found that most had an idea of how to handle one or two of these challenges but were often unaware of the third. Having their house burn down, well run dry, or pet lost to a predator higher on the food chain, proved to be the catalyst for many homeowners to abandon the wilderburbs and return to the city.

Q: The prospect of viewing animals is often part of the appeal of the setting until those same creatures is inconvenient or dangerous. How is this dual view of wild animals dangerous for both humans and animals?

LB: The relationship between wilderburb residents and homeowners is fascinating. In that relationship I saw the greatest expression of cultural assumptions and values in relation to wild animals. For many homeowners that I interviewed, the chance to live in proximity to wildlife was one of the main attractions that drew them to live beyond the suburban fringe. However, homeowners often felt differently about wildlife once they moved into wildlife habitat and encountered animals more frequently. 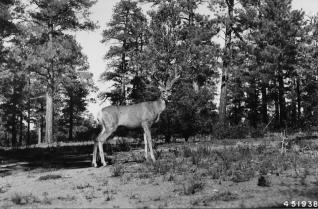 Mule deer in the West are the ubiquitous creature featured in wilderburb advertisements because they are prevalent and non-threatening. Once people live in deer habitat they are less than happy to find that the animal will eat all the blooms and ornamental shrubbery that homeowners planted around their property. For wilderburb residents, deer often cease to be a source of adoration and instead come to be seen as a nuisance, vandal, and threat to their property.

My favorite illustration of the values that people ascribed to animals involved moose in Utah. The state is the southernmost habitat in North America for a sub-species of moose. These massive animals have no fear of humans and are by far the most dangerous animal that people might encounter in that state. But due in part to the animal’s great stature and relative rarity, it is admired by much of the population. In the book, I discuss an incident in which a gentleman found a juvenile female moose in his front yard outside Park City, Utah. After retrieving his handgun, he fired several shots at the animal, wounding it and hitting his neighbor’s home with bullets. An outraged community prosecuted the man who received jail time and a fine for mortally wounding the moose, but only received a lesser fine for shooting into his neighbor’s home. The difference in sentence for shooting at an animal versus his neighbors was very illustrative of the high regard that the community held for the animals.

Q: In charting the history of wilderburbs, you present a model of development that is in constant conflict with the limitations of its wild setting. Will you describe that conflict and what, if any, solutions you envision? 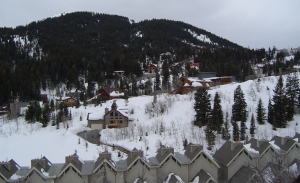 A view of Pinebrook and Summit Park in 2004. In the foreground are condos, reflecting the mixed-density design used in Pinebrook. Photo credit Lincoln Bramwell.

LB: The focus of the book is the constant tension between homeowners’ desires and reality, the points of friction where homeowners’ dreams for the landscape meet the reality of nature’s capacity to support those aspirations. Working through this project I found that nature is not merely a stage humans act upon, but neither is it an absolute determinate in human actions. A negotiation takes place between human culture and the natural world. Living on the fringe of urban spaces thrusts humans into new relationships with their environment. For many, these relationships are unexpected, surprising, and sometimes too much for them—spurring a significant proportion of movement back to the city after a short sojourn in the woods.

After studying this issue for years I think the best solution or remedy is for homeowners and government regulators to educate themselves about the potential costs and impact of this type of development. Never rely on developers assurances alone—make your own informed decision and understand the costs your home will have on the environment, the county, and your own lifestyle.

Q: Do you think that more should be done to educate people about the challenges they might face if they choose to move to wilderburbs?

LB: Absolutely more should be done to educate all three stakeholders in the wilderburbs—homeowners, developers, and planners. States and counties have a responsibility to educate their planners so that they understand the costs associated with rural development. Without this understanding, counties with fewer economic resources can unwittingly agree to providing services to far flung communities they did not anticipate before approving the residential project.
For homeowners, education should come from two self-interested sources: from counties that wish to maintain particular environmental or social amenities, and secondly, homeowners need to educate themselves about the possible risks of living in the woods. Wilderburbs is an excellent place to start!

Lincoln Bramwell is chief historian of the USDA Forest Service.

1 thought on “Wilderburbs and Wildlife in the American West: A Q & A with Lincoln Bramwell”